INTO says it expects decision on school reopening early next week 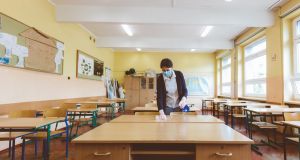 The INTO says a decision on the return of some primary classes is expected early next week. Photograph: iStock

The union representing primary teachers has confirmed that latest public health advice provided to Government allows for the return of some primary school classes from early March.

The Irish National Teachers’ Organisation (INTO), which is taking part in confidential talks over school reopening, said it expects a Government decision early next week.

It said a decision on the return of remaining classes is expected thereafter, subject to a close eye being kept on the public health landscape.

In the meantime, it said it will continue to participate in the planning process and is committed to ensuring schools receive adequate notice, supports and assurances to help them to prepare for any phased reopening.

The details are contained in an update sent to INTO members on Friday morning.

The potential of reopening primary schools for junior infants up to second class in early has been explored in talks with Government, according to sources.

Primary schools are understood to have said that they would find it logistically easier to reopen schools in two phases.

This could see third class to sixth class return in a second phase, possibly two or three weeks later.

However, sources have emphasised that public health advice will dictate the pace and scale of the return.

At second level, sixth year students are likely to return to school on March 1st. This will depend on the Association of Secondary Teachers Ireland agreeing to the move.

The Teachers’ Union of Ireland has already said it will facilitate reopening for sixth years from February 22nd onwards.

Reopening secondary schools will depend on agreement from both post-primary unions. The idea of returning fifth and third years next, followed by the remainder of classes, has been explored in talks, according to sources.

Again, it is likely there would be a gap of between two and three weeks to examine the impact on virus transmission rates. This means some pupils may not return to school until April. Sources say these plans may change depending on public health advice.

A decision on school reopening is likely to be reached on Monday or Tuesday of next week.

The Cabinet committee on Covid-19 is due to discuss the matter next Monday, while a meeting of the wider Cabinet is due the following day.

Nphet has said it wants to see a phased, cautious, slow return to the classroom, with time left between phases so the impact can be assessed, deputy chief medical officer, Dr Ronan Glynn said at a media briefing last night.

He urged people not to take the partial re-opening of schools as a signal that mobility or inter-household mingling was once again acceptable.