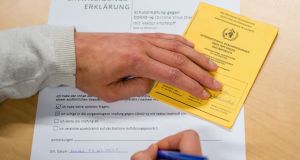 Are vaccine passports on the way?
It certainly seems likely, and although they may be a few months away it does seem inevitable that some type of system will be in place to allow people who have been fully vaccinated against Covid-19 to travel without the need for quarantines, PCR tests and other restrictions.

What exactly will they involve?
It is still too early to say, as multiple options are being considered by the authorities here, at an EU level, and across the world. Health and technology groups internationally have been working to create a digital vaccination passport on the basis that governments, airlines and other businesses may soon insist on proof of vaccination.

Are we far along that road?
We are pretty far. Right now the International Air Transport Association is trialing a digital passport, linked to electronic passenger information, that allows border authorities to check if a passenger has been vaccinated.

Then there is the Vaccination Credential Initiative, a coalition of organisations including Microsoft, Oracle and the US healthcare nonprofit Mayo Clinic, which is working to establish standards to verify if a person has had a vaccine and to stop people falsely claiming to be protected against the disease.

That comes on the back of the not-for-profit Commons Project, set up to develop a widely accepted digital cert to allow travellers to show they have tested negative for Covid-19.

“Individuals are going to need to have to produce vaccination records for a lot of aspects of getting back to life as normal,” the chief executive of the Commons Project, Paul Meyer, says. “We live in a globally connected world. We used to anyway, and we hope to again.”

How will such a system work?
That depends, as countries are most likely going to want to set their own rules. It is probably safe to assume that the systems will see people carry their vaccination records in a digital wallet or as a paper QR code that they can show to people as required.

Why are these vaccine passports being considered?
Because countries, businesses and the general public are anxious to see things return to the way they were as soon as possible. If Country A is progressing fast with a vaccination programme, it is entirely understandable for it to want to open up to visitors who have been vaccinated and are less likely to fall ill in their country, burdening their health service. There may also be a reduced threat when it comes to transmission of the infection.

Is there science to back that up?
There is certainly a growing body of evidence to suggest that vaccinated people are considerably less likely to fall ill with the disease. There is still no real clarity on whether a person who has been vaccinated can pass the infection on to others, which remains a big question hanging over vaccine passports.

What is our Government saying?
Minister for Health Stephen Donnelly says the Government has been examining proposals. “Some of the airlines have already floated the idea that you would need one of these vaccination certificates in order to fly,” he has said. “The answer to how exactly they might be used depends on how the vaccines perform in terms of things like transmissibility. When we have recommendations from the experts on the appropriate use of it, then we can decide what’s the easiest and most secure thing to do, in terms of is it paper-based or card-based, for example, like our driver’s licence, or is it a digital certificate that you might have to submit to an airline before being able to book a flight.”

What is happening in the UK?
There are conflicting views there. Last week, for instance, its vaccine minister, Nadhim Zahawi, said vaccination passports were “discriminatory”, but then last weekend the British foreign secretary, Dominic Raab, said they were “under consideration”. Other ministers have been more bullish about them.

And in the EU?
The president of the European Commission, Ursula von der Leyen, has said she supports a common EU-established vaccination certificate: “We have to have a medical requirement that proves that people have been vaccinated.”

Are there many question marks about such a system?
There are. Quite apart from the absence of hard data to show that vaccines can stop transmission, there are concerns about how vaccines will respond to variants, notably, at present, the South African and Brazilian mutations.

Anything else?
Yes. There are issues of fairness and privacy. In Ireland and many other countries people are being vaccinated based on set criteria. In this country, older and more vulnerable people, as well as frontline healthcare workers, are being vaccinated before younger cohorts. While such a policy makes sense from a public-health perspective, given the nature of Covid-19 and who it hits hardest, it does mean younger, healthier people will be at the end of the queue and will be denied opportunities to travel and to work overseas that others may have access to.

What are the privacy concerns?
The European Commission has said any vaccination-certification programme will be “in full compliance with EU data protection law”, but many people will inevitably have concerns that any system that insists on vaccines for international travel are a gross intrusion into their privacy. And it is pretty certain that big tech’s involvement in developing vaccine-passport systems is going to alarm some people.

Are there answer to these concerns?
The companies developing such passports for the UK, the biometrics company iProov and the cybersecurity firm Mvine, have said privacy fears are being overstated. Their vaccine pass system is being tested by the NHS. The founder and chief executive of iProov, Andrew Bud, says they only really need to hold two pieces of information: has the person been vaccinated, and what do they look like?

But vaccination passports are not new.
Not really. Many countries insist on proof of vaccination for a range of diseases. Many people will be familiar with the little yellow vaccination booklet, detailing inoculations, that is an entry requirement for some countries. Anyone looking to travel to parts of Africa, for example, has to prove they have been vaccinated against yellow fever before they are allowed to board planes, and the rules are rigidly enforced.

Are people preparing to use vaccination passports?
Yes and no. According to research by Tourism Ireland in the US, Britain, Germany, France and elsewhere, most holidaymakers expected vaccinations to be a mandatory requirement for travel within Europe in the future.

And are they happy about it?
Support is not universal. Three-quarters of Americans think it is a good idea; 68 per cent of Britons are of the same mind. The percentage of Germans who support the notion of vaccine passports falls to 46 per cent; the figure for French people is 42 per cent. The Tourism Ireland research suggests that a further 31 per cent of French people think mandatory vaccinations for travel purposes are a poor idea.

Will it have an impact on the domestic tourism market?
It might, but it does depend on where the tourists are coming from. Tourism Ireland has also looked at the attitude to vaccines across several markets. A majority of people in Britain and the United States are keen to take the vaccine as soon as they become available; Germans are “cautiously positive” about the vaccine. “In France, fewer than half intended to get vaccinated, and only a fifth said that they would get vaccinated as soon as they were offered the opportunity,” the researchers found.

Are vaccination passports being rolled out elsewhere?
Iceland was the first European country to give vaccination certs to citizens who had been given two doses of the vaccine last month. It also recognises similar certs issued by other EU countries. Denmark and Sweden are rolling them out too, while Spain is keen. “Vaccine certification is something we are going towards inevitably,” said foreign minister Arancha Gonzalez. “It will be a very important element to guarantee a safe return to mobility.”

This week, Greece, Cyprus and Israel reached a deal allowing  citizens with Covid-19 vaccination certs to move freely between the three countries. The agreement is being considered as a possible first step towards resuming tourism in the months ahead. “I expect what we will be doing with Israel to be a trial run of what we can do with other countries,” said the Greek prime minister, Kyriakos Mitsotakis, who first mooted  the idea of vaccine passports with other EU members last month.

Portugal’s interior minister, Eduardo Cabrita, has said vaccine certification will be easier to manage than current Covid-19 requirements and should “act as proof of security and do away with certain requirements at borders, in particular the requirement for PCR tests”.