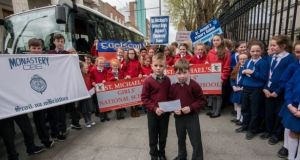 Children from schools in Tipperary gather at the Department of Education in 2017 to protest at their ‘exclusion’ from the Deis scheme. File photograph: Brenda Fitzsimons

The Government’s support scheme for children in disadvantaged schools is failing to narrow the achievement gap with other schools, an Oireachtas committee has heard.

Dr Katriona O’Sullivan, a lecturer in Maynooth University’s school of education, said a recent review of the Deis (Delivering Equality of Opportunity in Schools) programme showed that literacy and maths improved in line with all national improvements across all schools.

She called for changes to the programme such as subject support, aspiration-building activities and college awareness programmes.

“It is not enough to ask schools that are already stretched in terms of time and resources to plan their own activities when we have a body of knowledge which shows what works and what doesn’t,” she said.

Dr O’Sullivan, who is currently working in Oxford in partnership with the Department of Education examining the impact of alternative access routes, was speaking at an Oireachtas education committee which examined education inequality and disadvantage.

She said she was an early school leaver who went on to access higher education and now examines the impact of educational disadvantage.

“To many I am your average middle class woman. I am also the daughter of two heroin addicts, I am a teen mom, having a baby at age 15, and I am an early school leaver,” she said.

“I lived on Benefit Street for a long time and felt comfortable working in a café around the corner from here serving people like me fried egg and bacon.

“Through many supports and interventions I have been able to over achieve and outperform many of my friends in terms of education and employment and navigate the ‘dark arts’ of the system - but this has not been easy and it is my view that there is no easy solution to the problem you are addressing.”

Government officials acknowledged that a gap remained between Deis and non-Deis schools, but said a new strategy sought to narrow this through a new focus on interventions which have the greatest impact.

“In my experience, it works. I’d have more concern for those schools who don’t have Deis status who need those resources and who don’t get them...”

Elizabeth Waters, chief executive of An Cosán, said the intergenerational aspect of educational disadvantage was striking.

She said adult education had a crucial role to play in boosting and transforming the prospects of families.

Ms Waters said An Cosán’s work was driven by the knowledge of what it called the “one generation solution”.

“By educating young lone parents to degree level, they will earn 40 per cent more than someone without a degree, and she and her children will exit poverty forever,” she said.

She said that for 30 years An Cosán in Tallaght west has facilitated over 16,000 students to engage successfully in education from basic education through to higher education.

“An Cosán is now developing a national impact through our innovative and award-winning Virtual Community College, ” she said.

“This is scaling the work of An Cosán across Ireland bringing education, primarily higher education, to communities struggling with the injustice of poverty enabled by the latest on-line and mobile technology.”

She called for urgent attention to be focused on at-risk children, such as those in care and those with parents in prison.

Additional supports were needed to ensure better educational outcomes for these young people, who are over-represented in the criminal justice system, she said.