Plan to prosecute firms who offer paid-for essays to students

While current guidelines deal with plagiarism, they do not address ‘essay mills’ 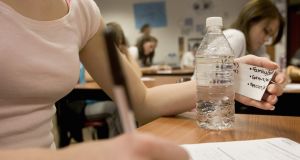 The scale of contract cheating is difficult to estimate, though there have been about 1,000 cases of students in Ireland being disciplined for plagiarism since 2010

The Department of Education is planning to introduce laws to prosecute “essay mill” companies who offer to write students’ assignments in exchange for money.

The move is a response to mounting concern over the practice which allows students to circumvent their college’s plagiarism detection systems. The use of these services is not easily detected as software used by universities only detects where students have copied from previously published academic texts.

Minister for Education Richard Bruton said he plans to give powers to prosecute “essay mills”, and is considering a ban on these companies advertising their services.

In a statement a spokesman for Mr Bruton said Quality and Qualifications Ireland (QQI) is to develop new guidelines for this area. He said the Qualifications and Quality Assurance (Amendment) Bill was also due to give the body “specific powers to prosecute ‘essay mills’ and other forms of cheating” .

He said the new guidelines would be developed in consultation with providers, students and other relevant parties, and would be informed by recent UK research and experience.

The QQI’s guidelines advise colleges that they “should have effective policies and procedures in place to prevent, detect, combat and deter plagiarism at all levels”.

The scale of contract cheating is difficult to estimate, though there have been about 1,000 cases of students in Ireland being disciplined for plagiarism since 2010, according to figures compiled by The Irish Times last year.

The real number is likely to be significantly higher given that several universities - UCD, UCC, Maynooth University and the Institute of Technology Blanchardstown – did not provide figures.

Of those that did, the Institute of Technology Tallaght topped the list of detected cases of plagiarism (206), followed by the University of Limerick (162) and DIT (143). The scale of detected issues is likely to be bigger at IT Tallaght as it has extensive detection policies.

All colleges reported that students were disciplined under their codes of conduct. These penalties range from written warnings for first offences to potential disqualification from the institution for repeat offenders.

While there are dozens of essay-writing services available internationally, an Irish example is a Dublin-based website called Write My Assignments. It describes itself as “an online education development company offering support to private individuals and businesses by qualified writers and researchers”.

It says essays are completed by a “postgraduate mentor” who has completed a relevant higher education course within the last three to five years, and achieved either a 2.1 or 1.1 within that discipline.

The website also provides a lists of courses at Irish higher education institutions where essay-writing services are available.

It told The Irish Times last year that demands for its services were growing and it was typically completing roughly 350 projects a year.

Mr Bruton’s spokesman said: “Plagiarism is currently subject to institutional disciplinary sanctions up to and including exclusion from the programme.

“Other approaches, including making it an offence to provide or advertise any form of academic cheating services, are currently being examined.”

He added that it was very difficult to get statistical information on prevalence of usage as “it is a form of cheating given that those offering the ‘service’ will not disclose it, those buying it will not, and there is no system-wide recording of detected instances of this or any other form of plagiarism”.