Parents warned of obsession with sending children to university 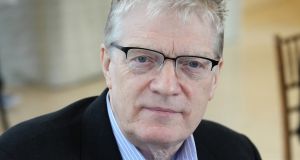 Sir Ken Robinson: he says the key is to remember that every child is unique and has different talents and abilities

Sir Ken Robinson came to worldwide prominence when he argued that schools were killing creativity and failing to recognise the diversity of children’s intelligence.

His 2006 Ted talk on the topic holds the record for the most watched talk online with more than 50 million views so far.

Visiting Dublin this week, he had a new message: parents all too often are also part of the problem.

“The bottom line for most parents is, if you ask them they want their kids to be happy, successful and fulfilled, right?” he said in an interview with The Irish Times.

“I don’t know many who want their kids to be unhappy, miserable and a failure. It’s not part of the normal agenda, is it? ‘I want to get my own back on these kids – because the’ve made me so miserable’!”

However, he says parents’ obsession with sending their children to university or securing 500-plus CAO points is creating a toxic and pressurised environment for many young people.

“If you think the whole purpose of education is to get your kid to university, or a particular university; and if you think the reason to do that is because they’ll have a degree and their future will be secure and they’ll have a nice middle-class job and a long-term income; if that’s the mindset you can see why parents add to the pressure.

“The problem with that preoccupation of a certain style of education is that it marginalises a great many of the other abilities and talents that kids have, and that they’ll need now and in the future.”

Robinson, a former professor at Warwick University, spoke on Thursday at a Talent Summit about how companies could foster creativity.

In terms of education, he argues that accelerating technological change means children today need a much broader set of skills and competencies such as creativity. However, our outdated, academic-oriented education system does not value these.

“Strategically [creativity] is becoming more and more important. More and more we’ll be thrown back on our resources to create the lives we lead, and to be more adaptable and resourceful.”

He says creativity is just part of the answer; collaboration, communication, compassion and citizenship are also vital.

For parents, he says the key is to remember that every child is unique and has different talents and abilities. Education needs to be contoured to meet their needs.

“Look at your child and say, who is this, who might this person become. You can’t predict it, but you can be sensitive to who this person is that’s unfolding in front of you.

“It’s important to look at the world around you, and think what sort of skills, competencies will they need to be able to live successfully in the world? Then ask, what kind of education to they need to do that?

“Too often the question is, ‘how do I get my kids to college, how do they get 550 points’, and everything else is sacrificed for that objective.”