Up to 2,000 under-represented students to get funding for college 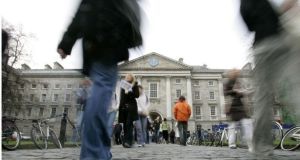 Up to 2,000 students who are under-represented at third level will be funded to go to college under a new State plan. Photograph: Dara Mac Dónaill

Up to 2,000 students such as lone parents and Travellers who are under-represented at third level will be funded to go to college as part of a State plan to boost access to higher education.

Almost €6 million is being provided to universities and institutes of technology to support a range of access initiatives over the next three years.

Regional groups of higher-education institutions have worked together to submit project plans to Higher Education Authority detailing how they intend to work together to improve access in their region.

This funding is aimed at helping to attract and retain an additional 2,000 new undergraduate students including those with disabilities, mature students who have never been to college and individuals from poor backgrounds.

At least 10 per cent of all places must be targeted at lone parents.

Minister of State for Higher Education Mary Mitchell O’Connor said the funding will help more people from disadvantaged groups to get to third level.

“A priority of mine is to provide target groups with more opportunities to reach their potential,” she said.

They also had the potential to help to break the cycle of disadvantage for many communities, she said.

Access plans produced by higher-education institutes have been independently assessed and four out of the six regional groups were successful in their proposals.

They include plans to boost educational aspirations for the most socio-economically disadvantaged people and provide opportunities into higher education.