UCD to re-designate more than 170 toilets as ‘gender neutral’ 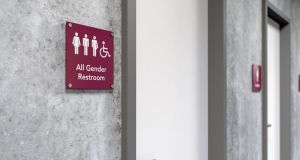 UCD is to re-designate over 170 toilets across the entire campus as “gender neutral” and introduce transgender changing facilities at its sport centre. Photo: iStock

UCD is to re-designate more than 170 toilets across the entire campus as “gender neutral” and introduce transgender changing facilities at its sport centre.

The move is part of a new university policy to provide a welcoming campus for transgender and gender-fluid students and employees.

In addition, UCD is to allow transgender students to change their names on official university award documents and other material without the need for gender recognition certificates.

Minister for Children and equality campaigner Katherine Zappone, who is due to launch the new policy on Thursday, has welcomed the move as another step towards “full equality for all”.

“Our universities are drivers of change, promoters of equality and champions of justice,” she said.

Trinity College, Dublin is phasing out the term 'freshman' for its first and second-year students and replacing it with the gender-neutral term 'fresh'

“ UCD is continuing that proud tradition by providing a welcoming campus for trans and gender-fluid students and employees.”

They are likely to have signs that include multiple symbols denoting a male, a female and another symbol where the left side of the figure is male and the right side female.

Multi-stall changing facilities in the UCD Sports Centre will also have signs to allow transgender individuals choose the facility of the gender that they identify with.

The move is part of a wider trend by universities across the State to cater to the needs of transgender students.

DCU and DIT have re-designated some of their toilets as gender neutral, while Trinity College, Dublin is phasing out the term “freshman” for its first and second-year students and replacing it with the gender-neutral term “fresh”.

UCD’s new “gender identity and expression policy”, however, is seen by many observers as the biggest yet by a university to promote a more inclusive environment.

Colin Scott, UCD’s vice-president for equality, diversity and inclusion, said the move was a “milestone achievement” and celebrated diverse genders and gender expressions reflected across its large staff and student population.

Ms Zappone is also expected to announce her support for lesbian, gay, bisexual, and transgender history to be included on the school curriculum.