Several hundred schools across the country are closed on Tuesday as part of an ongoing campaign against a two-tier pay system by the Teachers’ Union of Ireland (TUI). Video: Kathleen Harris 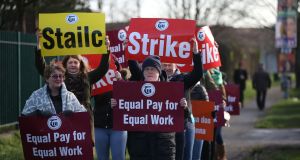 Teachers who are members of the TUI picket outside Greenhills College on Tuesday as part of a one-day strike over pay. Photograph: Nick Bradshaw/The Irish Times

The next government is facing potentially more industrial unrest in schools as the Association of Secondary Teachers Ireland (ASTI) on Tuesday said it expected its members to resoundingly back industrial action in a forthcoming ballot.

About 450 second level schools as well as institutes of technology and centres of further education were closed on Tuesday as a result of a one-day stoppage by members of the Teachers’ Union of Ireland (TUI) over lower pay arrangements for staff recruited since 2011.

ASTI members are also to ballot for strike action on the same issue with a result due on March 20th, the union said on Tuesday.

The TUI said it would “take stock” following the stoppage on Tuesday.

However its general secretary John MacGabhann said that while it was not threatening more stoppages it could not say day for definite that there would not be further strikes as part of its campaign against a two-tier pay system in schools.

He said 19,000 members of the TUI had gone on strike “out of exasperation, frustration and a deep sense of manifest injustice being experienced by a significant proportion of teachers”.

“We took the action on Tuesday because for the past year we have been shown from door to door and behind none of them was anything that had been promised.”

Mr MacGabhann said that the issue of pay equality had to be addressed and addressed very promptly.

He said the Minister for Education Joe McHugh had promised last year that the issue would be addressed without delay.

“Unfortunately we have seen nothing but delay”, he said.

Mr MacGabhann said teachers appointed in recent years had been disproportionately affected by cuts compared with other groups in the public service.

He said the Government had “come after teachers twice” during the years of austerity. He said in 2011 new entrant teachers like other public servants had experienced a ten per cent salary cut.

However said in 2012 the Government followed this up by abolishing allowances for new entrants.

He said in total new entrant teachers had experienced a 27 per cent cut in pay overall and were disproportionately affected compared with other groups in the public service.

The ASTI executive decided last month to ballot its members on industrial action over the two-tier pay system.

If the union secures a mandate for industrial action, this is expected to take place as part of co-ordinated campaign with at least one other education union.

ASTI has said it expected there would be “a resounding yes vote” from secondary teachers to industrial action in the forthcoming ballot.

The union’s general secretary Kieran Christie said it would be asking members to give consent to take further industrial action over the two-tier pay system.

“I would expect that it would be a resounding ’yes’ vote for the ballot,” Mr Christie said on Tuesday. He said the type of industrial action would be decided after the ballot and that “nothing would be ruled out”.

ASTI members protested outside the Department of Education on Tuesday, calling for an end to the two-tier pay system.

“There’s a recruitment and retention crisis in schools, younger, new recruits are not joining teaching. They are looking for work elsewhere and going abroad,” Mr Christie said. He said the bulk of teacher shortages were currently in the STEM subjects and languages

“But the list seems to be growing very quickly,” he added. “I would expect that in a couple of years every subject area will have a difficulty with shortages and schools will be advertising and there are no applicants for posts.”

Deirdre Mac Donald, the president of the ASTI said the two-tier pay issue must be resolved “once and for all”.

“Inequality of pay is unacceptable, it’s morally unacceptable, but also it is having severe repercussions for education and the evidence of this is the recruitment and retention problem that we have in teaching,” she said.

“The fact is we have certain subject areas where it’s virtually impossible to get a teacher...we are losing quality, from people who would like to teach but obviously you have to have a decent workplace, decent work conditions and pay equality is just a basic.”

Helen O’Reilly, a secondary school teacher at Oatlands College in Stillorgan, said she would consider moving abroad due to pay and conditions.

“I started teaching in 2013 and unfortunately to this day I am still paid less than less than my colleagues who qualified before 2011,” she said.

“The cost of living in south Dublin is astronomical, people can’t afford to move up to be close to the school where they work, they’ve to commute long distances...people are exhausted, they have to work second jobs to try and make up the shortfall to try and make up the lesser pay scale. It’s just really stressful.”