Achievement gap is ‘not large’ compared to many other developed countries 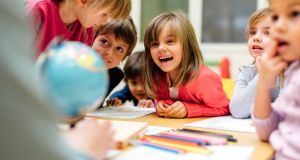 A 2016 study from Germany shows teachers expected lower performances from their Turkish students in German and maths. Photograph: iStock

Many migrant children are falling behind on reading performance compared to their classmates, according to evidence to be presented at a conference at Maynooth University.

Overall, first generation migrants in developed countries perform on average 10 per cent worse than students without an migrant background when it comes to reading performance.

While Ireland is slightly ahead of the OECD average, there remains a significant gap between migrants and non-migrants when it comes to reading.

Professor Frances McGinnity of the ESRI is due to present evidence from the Growing Up in Ireland survey which shows migrant students have lower scores on English reading than Irish peers. The gap is largest for Eastern Europeans.

African students have slightly lower maths scores at the same age, but other migrant groups do not differ from Irish students.

While English-language ability plays a key role, the overall migrant-native achievement gap at age nine is not large in Ireland.

She says the fact that Ireland does not have a long history of migration, the diversity of the migrant group and the relatively high qualifications of migrant parents mean the Irish experience differs from some other countries.

Overall, migrant children in Ireland have positive attitudes to school and their parents have very high aspirations for them, according to the study.

“These findings do suggest monitoring of both spending on English language provision and the effectiveness of such provision are important elements to facilitate the integration of migrant children in Irish schools,” Prof McGinnity said.

“Monitoring the proportion of migrant students in schools and their performance in State exams is also important to detect potential problems and areas of concern.”

The findings will be presented at the fifth annual Maynooth University education forum, which will see international experts demonstrate how migrant students are adversely affected by a range of factors, including language proficiency, socio-economic inequality, and teacher expectations.

Professor Irena Kogan of the University of Mannheim says these inequalities manifest themselves in student performances across a range of areas.

“By virtue of their often less advantageous economic positions, students with migrant backgrounds are less likely to have access to tutoring and learning supervision,” she says.

“Migrants are also effected by ethnic and socio-economic segregation, which often concentrates large numbers of them in poorer quality schools.”

Although data across the OECD reveals many challenges for students from migrant backgrounds, Professor Kogan also highlights some advantages they possess compared to other young people, such as higher educational aspirations.

“Migrants who choose to leave their home countries to pursue a better life elsewhere have demonstrated that they are highly motivated, and they often bring with them a drive towards upward mobility and a higher value of education.”

The forum is also due to hear of how differing expectations from teachers plays a role in determining the performance of migrant students.

A 2016 study from Germany, for instance, shows teachers expected lower performances from their Turkish students in German and maths. Students from better-off backgrounds were typically expected to perform better.

“There might be an element of self-fulfilling prophesy in this situation,” said Prof Kogan said.

“Students often perform in accordance with their teachers’ expectations. Positive expectations lead to better academic performance. Education is a two-sided process, and teachers need to be wary of pre-empting student competence and capabilities.”