If Carlsberg did parenting, they would leave out the Leaving Cert bit

It has been a battle to keep the household stress at bay, a battle I am not sure we’ve won 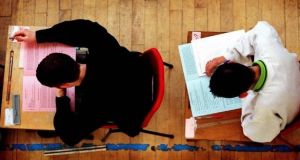 As a parent, the scariest feeling that has emerged in the days leading up to the exams is that feeling of helplessness. Photograph: Bryan O’Brien

Nothing prepares you for the day your first child is born, this is true, but nothing, still nothing can prepare you for the Tuesday night 18 years later when that little bundle of joy is telling you to eff off out of his room, leave him alone and, anyway, what the hell would you know about life?

I think I had just suggested that he perhaps pick up the pile of clothes, some of them clean, from the floor and return them to the appropriate wardrobe shelf before doing a little more study. The clean environment would help the concentration process. Not okay apparently, but of course the Leaving Cert has completely changed since I was doing it, so indeed what the hell would I know?

In Leaving Cert year anything and everything can be stressful. It has been a battle to keep the household stress at bay, a battle I am not sure we have won.

The reality is that the exams are stressful for both those taking them and indeed for all of the household. We have all been doing the Leaving Cert this year. Even the dog is so stressed he took his least favourite batman figurine into the back garden the other day and chewed off its legs. We are certain the incident was Leaving Cert-related.

My parents, sage-like as usual, have always advised that we “go easy on him” (the son, not the dog), “leave him alone”, “stop giving out” to their perfect, eldest grandson. Grandparents can get away with that strategy of grand parenting, of course, and indeed will embellish it with with vomit-inducing amounts of love and chocolate. They have adapted and expanded that thinking in the weeks, months and days leading up to the Leaving Cert and told me a few weeks ago: “Between now and the Leaving Cert you have to leave him alone, let him do or say what he wants and do not argue with him, just count to 10 and smile”.

We have been trying . If Carlsberg did parenting, they would leave out the Leaving Cert bit. It’s just too difficult.

The advice to parents is consistent and fairly simple when you read up on this stuff but its a lot easier to write down than to implement. The advice says you should be a support to your child. Be their rock, shower them with love. Give them your advice – after all you have been through all this yourself.

Tell them that plenty of exercise, regular breaks from study, a healthy diet and lots of sleep are the sure-fire way to success at the start of June. Read the question, don’t panic and then when you’re finished not panicking, read the question again.

All of which, is easier said than done. What are you meant to say? That the Leaving Cert is probably the scariest and most stressful exam you are likely to undertake? Hardly. But you can tell them that no matter what happens over the coming days it is not the end of the world if it goes badly. Life will go on.

As a parent, the scariest feeling that has emerged in the days leading up to the exams is that feeling of helplessness. So far when a problem occurs the child will often tell us. I’ve fallen and hurt myself will be solved by a hug and a plaster; Paul Fogarty’s big brother is bullying me on the school bus is solved by a conversation with Mr and Mrs Fogarty and the bus driver. I’m hungry is solved by a slap-up dinner. I don’t understand Maths, chemistry and honours German is met by help with homework or maybe a grind on a Saturday morning. And so on.

However, “I have to do the most important exam of my life” is not as easily solved by a parent. We, simply, cannot sit down and do the exam for them. For one of the first times, our children must go and do something very important, significant and difficult for themselves without our help. Now, there is nothing we can do.

As I write, we are in the half-life, where school has ended and the exams are just about start. The weather has turned good and everybody else in the world is thinking of summer holidays. We reached a compromise on the cleaning of the room whereby the many piles of books and study notes – and some of the piles of clothes – were lifted from his bedroom floor while I cleaned up.

The house is bright and airy, the open windows are allowing the smell of cut grass and the sound of playing children waft in late into the navy light of evening. After a pretty intense year, a calm has descended on the house. The calm before the storm.