Project maths: Do the reforms add up for students? 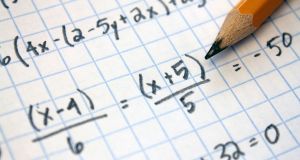 Five years ago, Project Maths was rolled out to secondary schools around the country.

Around the same time, students were offered the incentive of 25 bonus CAO points if they sat the higher-level paper.

Thousands responded to the incentive; this year, a record 36 per cent of Leaving Cert candidates took the more challenging paper, up from 20 per cent in 2011.

But have the changes to maths education been a success, and is it time we looked at it afresh?

The aim of the new Project Maths curriculum was to develop the problem-solving skills of students by giving examples of maths in real-world contexts and moving away from the pure maths focus of the previous curriculum.

“We picked up that the problem-oriented, problem-solving approach of Project Maths is positive,” he says.

“On the negative side, the use of language to describe problems can be a disincentive to people who do not have strong literacy or who are non-native English speakers.

“Some areas of the curriculum were dropped and it has turned out that this has been a disadvantage for some students entering third-level engineering courses. It is a well-intended initiative but it is now time for a longitudinal review to see what the strengths and weaknesses are, and to make changes where needed.”

Put simply, they’re doing higher level for the extra points, but they’re not up to it.

The National Council for Curriculum and Assessment (NCCA) is now carrying out a review which is expected to be released soon.

Meanwhile, during the summer, a review from the Education Research Centre is expected to once again raise concerns about the lack of time available to teach the maths syllabus, an issue that has been repeatedly raised by numerous teachers and ASTI subject representatives.

John Brennan of the Ballinteer Institute and ProjectMaths.com is among the more vocal critics of Project Maths.

“The extra 25 points means more students are doing higher level and then it is being declared a success,” he says.

“I am far from convinced that it is successful. The technical ability of these students is on the floor. I am seeing fourth and fifth year students in the Ballinteer Institute who are lacking the basics.

“Their ability to do basic algebra is more or less gone and, because of a common first year maths programme, they are not learning these basics at junior cycle level. The other two fundamentals that are needed for careers in science, economics, veterinary or other disciplines involving maths – trigonometry and differential calculus – are not getting the attention they need.”

Mr Brennan says that the extra 25 points has driven more students towards higher level maths when they are not cut out for it.

The failure rate, which has doubled to five per cent, would seem to bear this out and there are growing concerns in education and political circles that some elements of the maths education programme are not delivering.

“Now that the pass mark for higher level is set to 30 per cent, students can get more wrong than right and still pass,” says Mr Brennan. “They then go on to third-level courses requiring maths and are not up to speed. Some drop out. This is not working as intended.”