58,543 students across Ireland receive their leaving Cert results today. Minister for Education Richard Bruton was at Maryfield College in Dublin to congratulate students. 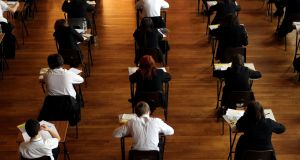 There are sweeping changes to the Leaving Cert grading system for the 58,550 students who receive their results on Wednesday.

The old familiar grading system – A1, B2, C3 – is replaced with grades from H1 to H8 (for higher-level subjects) and from O1 to O8 (for ordinary level subjects).

In all, there are a total of eight grades available this year at higher and ordinary level separated by margins of 10 per cent.

This compares to 14 under the old system, typically separated by margins of 5 per cent.

These changes are aimed at taking some of the heat out of the “points race” and easing some of the pressure on students. Under the old system, the majority of grades were separated by just 5 per cent, equating to an additional five CAO points.

This caused heartbreak for many students who failed to qualify for their chosen college course because they missed out by such a narrow margin.

The new system should also ensure fewer students miss out on courses due to random selection, based on trials using the new marking scheme.

The changes have already resulted in more students opting to take subjects at higher level, given the risk of “failing” is reduced.

Some may question whether the new system is simply a “dumbing down” of the old one.

However, the State Examinations Commission insists there has been no change in the exam standards of the Leaving Cert. Rather the change relates to how candidates’ results are reported to them through the new grading system.

Critics also say the system could end up rewarding some students with relatively poor performances ahead of those who fared better.

For example, a student who gets 59 per cent will be awarded the same points as one who gets 50 per cent under the new system.

In any case, the new system has the support of the majority of teacher, parent and student groups.

Groups such as the National Association of Principals and Deputy Principals have advised students that while results day is an important chapter in their lives, it does not determine the rest of it.

“Even if you haven’t received the results you would have preferred, the option is there to repeat, or to pursue further education as an alternative or a stepping stone to third-level study at college,” said Clive Byrne, the association’s director.