With many facing persecution and imprisonment, online Pride events are a safe haven 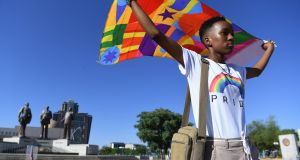 A woman takes part in the first Botswana Pride Parade, in Gaborone, on November 30, 2019. Photograph: Monirul Bhuiyan/AFP via Getty Images

As lockdowns and restrictions limit physical movement across Africa, persecuted and marginalised LGBT communities have been finding new support online. This has ranged from fundraising opportunities to more chances to connect internationally.

In one example of transcontinental support, US-based charity and activist group the Sisters of Perpetual Indulgence began holding online drag shows to raise money for LGBT refugees in Kenya. More than $10,000 (€8,700) was donated, enough to supply hundreds of people with food for two months.

Craig Paris, a Ugandan 28-year-old who has been in Kenya for six years, took part in one show himself, reading a poem of thanks. “It really touched my heart,” he said. “It’s as if the internet is a very big tool that connects us here. It raised the spirits, people watched the shows and it was really interesting.”

People hook up, they break up, they fight, but people remember that they are not alone

He added: “We just want to make it through this period so that we get resettled.” Like many other LGBT refugees in Kenya, Paris is going through the processes necessary to be transferred to another country where same-sex relationships are legal, in his case the US. “The community is really a resilient one but it cannot do that without support. Otherwise it would be such a lonely place.”

Across Africa, Pride festivals are sporadic, as LGBT communities face harassment from police, arrests and extortion. Over the past month, many have gone online.

“All the world is having these scientific virtual Prides,” she said, adding that Uganda would do the same.

“Everyone knows I’m a queen of Pride . . . We have so many members in our communities who fear to join the struggle because they think they have to be on TV, on radio and speak out . . . Pride is more about bringing the community together. Socially, politically, and whatever. People hook up, they break up, they fight, but people remember that they are not alone.”

Human rights groups have accused the Ugandan government of using coronavirus restrictions to target the LGBT community. Early in Uganda’s lockdown, 13 gay men, two bisexual men and four transgender women were arrested at a shelter and accused of violating the coronavirus ban on mass gatherings.

The group spent one-and a half monthnearly 50 days in prison, with lawyers saying they were denied medication.

Homosexuality is illegal in more than half of Africa’s 54 countries, with some countries relaxing and some hardening their laws in recent years. On June 29th, Gabon voted to revise a law criminalising same-sex relations, making gay relationships legal again.

In Ethiopia, where the penalty for homosexuality can be up to 15 years imprisonment, LGBT people with internet access were able to tune into an online Horn of Africa Pride festival, which took place on June 18th over six hours. Organisers described the event as “powerful and historic” as well as “beautiful and carefully curated”. More than 7,700 people watched it on Facebook and Zoom.

Activists with House of Guramayle, an organisation supporting Ethiopia’s LGBT community, told The Irish Times the internet has always been a “comparatively safer space for our queer bodies to communicate and find our kind . . . Seeking and getting connected to other queer beings is our coping mechanism.”

The activists – who preferred to speak as a group – said Ethiopian LGBT people are facing many challenges during lockdown, including being locked up at home with homophobic or transphobic family members; an increase in physical and emotional abuse; and barriers to accessing health care.

“At the moment the homo and transphobic rhetoric are at a peak in Ethiopia, starting from blaming queerness as the cause for Covid-19.”