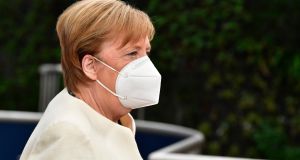 European Union leaders may not reach a deal on a coronavirus stimulus plan on Sunday, German chancellor Angela Merkel said as marathon negotiations ran into a third day and acrimony mounted over the demands of rich but thrifty countries.

Germany and France, are seeking a deal on a €1.8 trillion economic recovery package. After two exhausting days of negotiations, a so-called “frugal” group of northern, richer states led by the Netherlands appeared no more willing to back down from demands for cuts to the package.

“There is a lot of goodwill, but also many positions. I will make every effort but it is possible that there is no result,” Ms Merkel said in Brussels as she arrived for a third day of talks.

On Saturday evening the debate over the bloc’s financial future became “heated”. The leaders are split over both the size of a recovery fund and the seven-year EU budget due to start next year. There is also stark division over the nature of the conditions attached to the emergency Covid-19 funding and the balance between grants and loans on offer to countries hit by the crisis.

Latvia’s prime minister, Krišjanis Karinš, tweeted on Saturday: “Today there is a heated debate about the multi-annual budget and the reconstruction fund in order to reach an agreement.”

Taoiseach Micheál Martin had earlier called on his EU counterparts to set aside disagreements and forge a deal on the recovery plan to counter the economic fallout of the pandemic, amid growing fears that Covid-19 is bouncing back in Europe.

Mr Martin spoke in Brussels as Belgian national authorities prepared to meet to respond to a jump in detected coronavirus cases.

The Taoiseach said the talks with fellow national leaders had revealed “a real caution and nervousness around the reopening that’s going on in various countries, the degree to which the virus is simply not going away, the idea that we are going to have to live with Covid-19 for the foreseeable future”.

“What impact would that have on the European economy in 12 months’ time?” he asked. “Hence the necessity to get a deal through now.”

Saturday saw a second day of negotiations to find a compromise on the plan, after Dutch demands for a veto on how recovery funds are allocated to member states halted progress late on Friday night.

Italian prime minister Giuseppe Conte claimed on Saturday that the Dutch were trying to rewrite the EU’s rules.

“We are stalled, it is proving very complicated, more complicated than expected, there are many discussions on what we are discussing that we are unable to resolve,” Mr Conte said of the summit in a video message on his Facebook page on Saturday evening.

Dutch prime minister Mark Rutte said the atmosphere between the leaders had been “grumpy” on Friday, but insisted that any recovery funds needed to be tied to requirements for reforms to ensure that economies are in a stronger position to face future shocks.

“One of the points that I have of course made is the importance of reforms, and that they really need to happen now to make sure that next time, if for some reason there is a crisis again economically or otherwise, countries are better able to take care of themselves,” Mr Rutte told reporters.

The Netherlands has led a group of so-called frugal states in demanding reductions to the size and generosity of the proposed €1.8 trillion package, which includes the seven-year EU budget due to come into place from January as well as a €750 billion recovery fund aimed to funnel stimulus money to the states worst hit by the pandemic and its economic impact.

But a range of countries from across the continent have appealed for the holdouts to drop their objections to allow for relief money to start flowing quickly to the worst-hit regions and prevent the economic damage from worsening.

“There is a group of countries that we call a group of misers, and they call themselves frugal, who want a smaller contribution to the budget, which we call the budget for rebuilding Europe,” Polish prime minister Mateusz Morawiecki told reporters.

The president of the European Council Charles Michel put forward a new draft of compromise proposals in a bid to forge agreement on Saturday, The Irish Times understands. These include tweaks to the budget, changes to how recovery grants are allocated, and the possibility for countries to object to the granting of recovery funds to fellow member states through an emergency procedure if they have serious concerns.

In a sign that agreement may be possible, a Dutch diplomat told The Irish Times the governance proposal was “a serious step in the right direction”.

Mr Martin said there was a need to “step back from the minutiae” to focus on how to address a recession economists have forecast could be the worst in a century.

“We’re saying Europe has to recover because we’re an exporting nation, we want a European-wide recovery because that will help to underpin an Ireland-wide recovery, that’s the stance we’re taking,” the Taoiseach said.

“We do get the big picture that Europe does need to do something dramatic and something impactful through a collective approach to raising substantial funds, and allocating them to where it matters.” Additional reporting: Guardian/Reuters