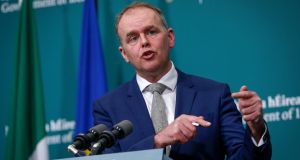 Minister for Education Joe McHugh said the decision was being taken with the students’ best interests in mind. Photograph: Crispin Rodwell

The Junior and Leaving Cert oral and practical exams for tens of thousands of students are to be cancelled, Minister for Education Joe McHugh has announced.

All students who were due to take these tests will be awarded full marks for this portion of the exam.

These tests are worth up to 50 per cent of overall marks in Leaving Cert music, 40 per cent in Irish and 25 per cent in other languages.

In the meantime, Mr McHugh said his department was working on the assumption that the Leaving Cert would still go ahead as planned.

One contingency plan which is being examined by officials is cancelling or deferring the Junior Cert to provide extra space in exam centres to hold the Leaving Cert, according to sources. However, Mr McHugh said no decisions had been made.

The move to cancel the oral and practical exams, however, has drawn a mixed reaction.

Many students expressed disappointment that their hard work would not be recognised and worried that written exams may end up being marked harder to compensate for the additional marks.

How is the Coronavirus crisis affecting you?

However, many others said they were relieved that there was now greater clarity over the exams.

Most political parties said the move would relieve pressure on students. However, Green Party leader Eamon Ryan questioned why video-conferencing technology such as Skype could not have been used.

Mr McHugh said students were facing a challenging period out of school and the decision was being taken with their best interests in mind.

“It is the fairest response we could take in the circumstances. It guarantees that no student will score less than they would have if schools had been operating as normal,” he said.

“We have seen a new emphasis on remote learning amid the uncertainty about the impact of Covid-19 and the closure of all schools. I hope this decision will ease some of the pressure that students are feeling and allow them to focus more clearly on completing project work and preparing for written exams.”

The change to the 2020 State exams means all students who were due to take oral and practical performance tests in the following subjects will be given full marks for this part of the examination:

Mr McHugh also confirmed changes to deadlines for students to complete project work and coursework in a number of subjects.

Students were originally scheduled to complete these elements of the State examinations on a number of dates from Friday, March 20th to Friday, April 24th 2020, depending on the subject.

Students will now be given until Friday, May 15th, 2020 to complete this work.

“We know we are asking a lot of people in order to stem the spread of Covid-19,” Mr McHugh said. “ In response to that I want students and their parents or guardians and teachers to be given flexibility as they work towards the exams.

“All of Government is hugely grateful for the effort, commitment and energy that students and teachers are putting in to continue education in difficult circumstances. I urge you all to keep up the momentum and focus on preparing for the exams.”

He also said the department would continue to work with the State Examinations Commission to monitor the Covid-19 situation in terms of its potential impact on the other later scheduled components of the State examinations.

“We will continue to respond at the right time and in the right way, with the impact on our students at the forefront of our minds,” he added.