Two inpatient beds out of three remained empty during April 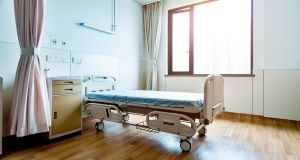 Three of the private hospitals taken over by the State to help deal with the Covid-19 epidemic accommodated no patients during April, at the height of the crisis.

Overall, two inpatient beds out of three remained empty for the month in the almost 20 private hospitals covered by the deal, which is costing the State €115 million a month.

The Health Service Executive (HSE) says occupancy rates have increased since then.

There was 0 per cent occupancy at St Francis Hospital in Mullingar, Co Westmeath, which has 77 beds; Kingsbridge Hospital in Sligo with 19 beds; and Bon Secours Limerick, which has more than 50 beds, according to figures provided by the HSE to The Irish Times.

Kingsbridge and the Bons Limerick had a large outpatient caseload, according to the HSE.

Another private hospital, the Sports and Surgery Clinic in Santry, Dublin, had a 6 per cent occupancy in April. It carried out just 44 day case and 120 diagnostic tests during the month, an average of fewer than 10 appointments per working day.

The occupancy across all sites in April was estimated by the HSE at 36 per cent, with data for early May showing a rise to 48 per cent, it says.

The hospitals with the highest occupancy were the Bons Tralee, Co Kerry at 86 per cent and St Vincent’s Private in Dublin at 82 per cent.

Other hospitals with low occupancy rates included the Galway Clinic (23 per cent); Aut Even in Kilkenny (21 per cent); and the Bons Dublin (25 per cent).

In Dublin, the Mater Private was 60 per cent occupied; the Blackrock Clinic had 45 per cent occupancy; and the Beacon was 34 per cent.

In total, private hospitals discharged 2,654 inpatients during the month, with the highest figure treated at the Bon Secours group of hospitals (860). There were 59 inpatient discharges from the Blackrock Clinic and 57 from the Mater Private Cork.

The private hospitals also dealt with a total of 8,585 day cases, 1,071 new outpatients, 2,109 returning outpatients and carried out 7,887 diagnostic tests.

The work performed included cancer surgery, chemotherapy services and urgent cardiac treatment, according to the HSE. Some hospitals also supported the delivery of emergency care and two supported nursing homes through the provision of a geriatrician or nursing service.

In April, only “critical essential work” was undertaken in the private hospitals, “as per National Public Health Emergency Team guidance”, according to the HSE.

This was loosened after May 5th to allow more work to be carried out, it says, and hospital groups have been tasked with drawing up plans up to the end of June aimed at “optimising” capacity.