Leaving Cert ‘Plan B’ could see grades based on class rankings 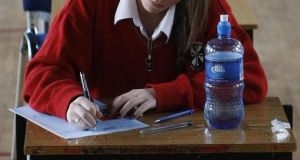 Under the proposals, students would be able to appeal their results to the department and not to schools. Photograph: Niall Carson/PA Wire

Leaving Cert students may be awarded grades based on their class ranking and their performance in recent assessments under a potential ‘Plan B’ to the summer exams.

The Irish Times understands that a draft Department of Education plan could involve school principals signing off on a process where teachers award provisional grades based on student performance to date.

These grades would then likely feed into a process where final grades could be awarded using a “bell curve” and other indicators.

Students would be able to appeal their results to the department and not to schools.

Sources have emphasised that this option is still a proposal at this stage but would be likely to secure the backing of secondary teachers’ unions.

The ASTI and TUI have been holding meetings on Thursday to examine the proposals and discuss issues with senior members.

The move towards producing a “Plan B” comes amid a growing concern over the health risks of pressing ahead with the exams during the summer.

Both unions are understood to have expressed grave concern over the safety of proceeding with two weeks of school in July and staging exams during a private meeting with department officials on Wednesday. These fears focused on what safety measures would be in place for social distancing, what hygiene practices would be required and whether teachers and staff would be required to wear personal protecting equipment, according to sources.

Taoiseach Leo Varadkar told the Dáil on Thursday the Government would “try to bring a conclusion” this week to the uncertainty surrounding the Leaving Cert.

He said it was possible to carry out the exam within existing public health guidelines “but it would not be the Leaving Certificate as we know it.

“If it is cancelled we must make sure that we can put in place an alternative which would be fair, which is extremely difficult.”

He was responding to sharp opposition criticism of the handling of the crisis, claims of “dysfunctionality” in the Department of Education and allegations that the Government was “bullying” students.

Comparing Ireland’s response to that of other EU states on handling final exams, he said that “nowhere has there been such a lack of clarity and confusion. The fact that the reopening document published last week failed to address it is remarkable.

“We are now beyond the stage where clarity must be provided and the Government must be honest about the ability to complete the leaving certificate in the coming months.”

Labour leader Alan Kelly described the Government’s handling as “an unmitigated disaster” and he called for the Taoiseach to intervene.

“The stress these students have been put under is intolerable. This needs to be finished. We need a ‘Plan B’ and it needs to be out there this week.”

Solidarity TD Mick Barry said there was a “crisis of democratic legitimacy” around the exams as he pointed to a survey of almost 24,000 students, 79 per cent of whom wanted cancellation and just 15 per cent wanted the exams to go ahead.

Mr Barry said students felt they were “in effect being bullied by the Government”.

The official position of Minister for Education Joe McHugh remains that plans are continuing for the exams to commence on July 29th, subject to public health advice.

He has also stated that his preference is for schools to return for two weeks ahead of the exams, to allow students catch up on coursework or engage with teachers.

However, the fact that teachers have major health concerns will be a major factor in determining whether the exams can go ahead.

In addition, an overwhelming majority of students want the exams to be cancelled, based on a survey this week by the Irish Secondary Students’ Association.

The issue of teachers’ grading their students has been a source of major opposition within teachers’ unions in the past.

However, sources say unions recognise the urgent need for an alternative to the Leaving Cert and for unions to be seen to support students.