Primary schools must reopen. It’s time for parents to make their voices heard

Opinion: If there are sound reasons why schools cannot go back until September, they have not been explained to the Irish public 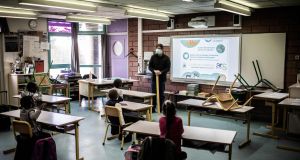 Pupils listen to their teacher in a classroom of of the Saint-Exupery school in the Paris’ suburb of La Courneuve. This week, primary schools in France re-opened after an almost two-month closure. Photograph: Martin Bureau/AFP

Two weeks ago the Government published its roadmap for reopening society and business. In the 23-page document, its plans to keep schools closed until September merited just a footnote.

On page eight, under education and childcare measures, are the words: “Commence opening on phased basis at the beginning of the academic year 2020/21: Primary and secondary schools; universities, third level education centres and adult education centres.”

There was no explanation as to why schools are to open last of all after offices, construction sites, garden centres, restaurants, bookies, bars and barbershops.

There was even an acknowledgement in a footnote to the footnote that infections are “less frequently observed in children and that child-to-adult transmission appears to be uncommon”.

Yet, the roadmap envisages schools remaining closed for the next four months. This approach is looking increasingly questionable.

Taoiseach Leo Varadkar’s comments yesterday that reopening schools is “among the safest things that we can do over the next couple of months” has raised hopes that schools will open sooner rather than later.

By sooner, parents and pupils mean the current school year and not in September.

Mr Varadkar was maddeningly vague on the details. What does the “next couple of months” even mean? Is it now, next week, next month or in September?

Does he understand that this kind of casual speculation only leads to false hope and disappointment among children who desperately want to go back to school?

We have been here before. In April, Minister for Health Simon Harris said children might be able to go back to primary schools one day a week. The Irish National Teachers’ Organisation expressed a hope that children could return to school in June. What happened to those proposals?

No explanation has been forthcoming because parents and pupils, the key stakeholders to use managerial jargon, are supposed to put up and shut up when it comes to Irish education.

It is becoming clear that the high-handed and peremptory decision to close schools until September, without keeping the situation under review, was unnecessary.

The medical reasons for it look increasingly tenuous. A study by the Health Information and Quality Authority concluded, albeit from limited evidence internationally: “It appears that children are not, to date, substantially contributing to the household transmission of SARS-CoV-2. From one study, SARS-CoV-2 transmission in children in schools is also very low.”

The Taoiseach suggested yesterday after a meeting with the World Health Organisation’s Dr Mike Ryan, that it would not be a “good reflection on us as a society to be the last people who are able to re-open our schools and re-open our childcare facilities”.

Only Italy and Spain in Europe have planned to keep their schools closed until September and they have been hit hardest of all by the coronavirus pandemic.

We have the spectacle at present of the horse racing and vintners’ representative groups lobbying the Government to reopen earlier than planned.

Who will speak for the 500,000 primary school pupils in this country who have seven weeks of schooling left? Why should they have to wait?

By the time schools return in September, if they do, these children will have been out of the classroom for almost six months. Children in sixth class will make the huge transition to secondary school without the careful preparation needed for such a change.

While the public debate has been fixated about the fate of the Leaving Certificate, primary school children too are suffering stress and have had their lives upended by this pandemic.

If there are sound reasons why schools cannot go back until September, these reasons have not been explained to the Irish public.

The chief medical officer Dr Tony Holohan acknowledges there have been many studies carried out which justify the contention that children are not major spreaders of the disease and are not adversely affected by it.

However, he would not budge on the health advice that schools should remain closed.

“It is an entirely different thing to conclude in policy terms that we have enough evidence to say that transmission from children doesn’t occur but as yet it hasn’t been identified as a significant issue in the small number of studies that have been done,” he said.

Dr Holohan wants evidence-based public health policy. So do we. He should, therefore, point to the studies that show children are significant spreaders of Covid-19 and that it constitutes a significant health threat to them.

He might explain why the Republic cannot follow Denmark where children went back to school almost a month ago.

The experiment there has worked to date. The Danish R0 has continued to decrease from 0.9 to 0.7 since the schools reopened and pupils in middle school are also returning.

They are also returning this week to school in Belgium, the Netherlands and France, three countries which have higher mortality rates than Ireland from Covid-19.

If the Government and the National Public Health Emergency Team know something about the danger of sending primary school children back to school that the rest of Europe does not know, they should share it with us.

In Switzerland primary schools started back on Monday. The country’s public health spokesman Daniel Koch justified this decision succinctly: “It is very rare for children to transmit and get the disease. Children very rarely infect other children. The situation is stable and there is no contradiction that the schools are reopened - it is understandable and correct.”

If the Government and the National Public Health Emergency Team know something about the danger of sending primary school children back to school that the rest of Europe does not know, they should share it with us.

There is still time for primary school children to get a meaningful education this year. It is not just education they are missing; school is a huge part of their socialisation.

The absence of routine is causing a huge strain. That strain will only get worse as the economy starts to reopen.

How are those parents who are expected to go back to work on May 18th, June 8th and June 20th supposed to provide childcare for primary school pupils?

The closure of primary school needs to end sooner rather than later.

Parents need to make their voices heard on this issue. Things cannot go on as they are going on.