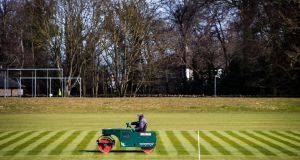 Ireland’s two T20 international against Pakistan at Malahide in July have been postponed due to the Covid-19 outbreak. Photograph: Ryan Byrne/Inpho

Cricket Ireland has postponed the home summer fixtures against both New Zealand and Pakistan due to the ongoing Covid-19 pandemic, while the dates for the three One-Day Internationals in England this September may also be moved.

With the series against Bangladesh previously wiped out, it leaves the senior men’s team without a summer home fixture and supporters starved of top-level cricket.

Cricket Ireland chief executive Warren Deutrom confirmed that New Zealand informed them that they could not travel for the series of T20 and ODI internationals at Bready and Stormont in June and July on the eve of their virtual board meeting on Wednesday.

“While of course it’s disappointing for the fans in Northern Ireland who I know were looking forward to the visit of the World Cup runners-up, given the circumstances we entirely understand NZC was left with no choice but to stay at home,” said Deutrom.

NZC chief executive David White has left open the possibility that the Blackcaps will come back in the future to fulfil the fixtures.

The two T20 internationals against Pakistan at Malahide on July 12th and 14th were in doubt after the Irish Government’s roadmap was laid out on May 1st, with Deutrom confirming that different venues and dates were looked into without any success.

“We deeply regret that we can’t provide any international cricket at home to our fans this year, but we were always up against it with our entire home international programme coming in the first half of the season,” said Deutrom, who also confirmed that negotiations continue with their English counterparts into the ODIs against England in Nottingham, Birmingham and London in mid-September.

“We understand the desire for getting back on the cricket pitch and rest assured we are working hard to ensure this can happen,” said Deutrom.

“This process will not be like flicking a switch unfortunately and the realities of formalising hygiene protocols and social distancing in a cricket context means we need to ask for continued patience from the cricket community while we work with government, sports and health authorities on both sides of the border to see cricket resume in 2020.”