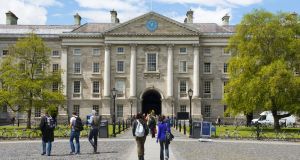 The latest rankings show Trinity has slipped 44 places to 164th

The flaws with college rankings are well documented. They are produced by commercial organisations which sell their expertise on how to perform better. They ignore key aspects of college life such as the quality of teaching and learning. And the science behind some of the indicators is suspect, at best.

But there is no denying their influence.

They play a central role in guiding flows of lucrative international students, as well as influencing research and foreign direct investment. Like them or loathe them, they matter.

Overall, of the eight ranked universities in the State, two lost ground, two gained ground and the remainder stayed broadly the same. A closer analysis of their scores under headings such as teaching, research, citation, industry and international shows that, broadly, their performance is steady. But this is no longer good enough in the hyper-competitive world of global education.

While Irish third-level institutions are treading water, rival universities in Asia are making waves and benefiting from sustained investment by their governments. It’s no coincidence that the decline of Irish universities has mirrored austerity-era policies.

State funding for the sector tumbled by up to one third, while colleges were left to make up the difference.

The Government argues that it has increased funding by about 25 per cent since 2015. It also has a new five-year programme of increased investment amounting to €300 million commencing next year.

In reality, say senior academics, this funding is simply being swallowed up in order to keep the system standing still.

The bulk of additional investment has gone towards rising student numbers – up about 20 per cent in the past decade – and the cost of public sector pay deals.

In fact, this year, the Government used increased third-level funding from a levy on businesses to reduce its own core contributions by about €15 million.

As Trinity’s dean of research has noted, the only way to boost the rankings of Irish colleges is through investment that prioritises excellence.

The Government faces some big decisions: does it loosen the purse-strings and make higher education a national priority?

Or does it loosen restrictions such as caps on staff recruitment or salaries to give colleges greater freedom to compete with others?

Most universities, after all, now generate the bulk of their income privately.

Either way, the cost of doing nothing is likely to be clear in a continued slide in the reputation of our top universities.