TCD’s falling rankings: ‘It does not give me confidence in the Irish system’ 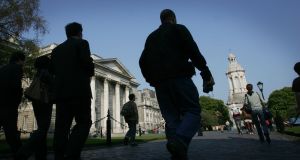 Zoe Ellingboe almost didn’t go to Trinity. The first-year theoretical physics student was close to making the jump to university abroad, due to Irish institutes slipping in higher education rankings.

“Trinity was the centre of theoretical physics during the 1800s, and they were very much toting that when we had our first Introduction to Physics – which sounded really cool, except [for] the fact that the thing they’re most proud of is in the 1800s,” she said.

Though she ultimately chose Trinity to be closer to family, she believes going further afield “would have helped academically”.

“It does make me sad that there’s nothing quite akin to the standard of some universities abroad here. Trinity is a good university, but it’s not quite at that standing,” she said. “The fact that none [of the universities] in Ireland are in the top 100 doesn’t give me confidence in the Irish system.”

Trinity has seen its international ranking spiral downwards in recent years. The Times Higher Education rankings for 2020 have continued this trend, seeing the university fall from 120th to 164th place.

First-year maths student Luke Mooney-Foley had initially been deterred by the university’s slipping in the rankings. The rankings “definitely would have pushed me away, if I didn’t keep looking into the research they were doing”, he said.

“It is worrying to see it going down, but it wasn’t really an option for me to go anywhere outside of Ireland for university,”said first-year maths student Ciara Fagan.

Ryan Cleary, studying a master’s in economics, said: “Trinity has a lucky position to a certain extent, because it can fall down the rankings but still be the top ranked in the country, so for a lot of people from Ireland, it’s not going to make that much of a difference.”

Rankings are also an important draw for international students. French Erasmus student Annette Charles, studying history and political science, said they had been a factor in her decision to attend Trinity for the year.

Many students felt the figures had little effect on their day-to-day learning. Fourth-year law student Clare Barry felt the decline was “probably worse for the college than it is for the students because they won’t get international students coming, and then they’ll lose money”.

Yet postgraduate physics student Aaron Sinnott said the rankings were “concerning” when it came to a job search beyond Ireland.

“If you were to go to the [United] States or most places in Europe, they’re not going to know the college by reputation,” he said. “If it keeps slipping all the time, it’s going to reduce the value of your degree.”

Fourth-year law student Niamh Carroll believed underfunding was responsible. “You see it throughout the university, and I’d say it’s probably the same in all universities at this stage.”

For second-year history student Eppie Shanahan, the decline in rankings was a “shame”. “Education is such a big thing. It should be prioritised a lot more.”