Ireland hailed for its commitment to education in developing countries 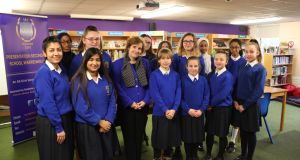 Ireland has emerged as a world leader in its commitment to helping boost the prospects of young people in developing countries, according to the world’s biggest funding partner for education.

During a visit to a Dublin school on Wednesday, Alice Albright, chief executive of the Global Partnership for Education, commended the Government’s recent commitments to substantially raise its overseas aid contributions.

“We’re delighted the Irish Government has been so generous to us. When we think about Ireland, we think of a country that regularly and successfully punches above it weight,” said Ms Albright, daughter of former US secretary of state Madeleine Albright .

“It’s not an enormous country, obviously, but it’s an incredibly generous country. Of all the countries that have supported the Global Partnership for Education financially, Ireland stands out for many reasons: its generosity and the fact that it’s the only country which contributed more money than we asked for... we’re delighted to have it as a partner.”

Shut out
Latest research by international non-governmental organisations estimates that more than half of the upcoming generation – some 825 million young people by 2030 – will be shut out of opportunity through education.

Earlier this year in Dakar, Senegal, Minister of State for overseas Ciarán Cannon told world leaders at a conference that Ireland would double its pledge to the Global Partnership for Education to euro25 million between now and 2020.

The partnership is the only international partnership and fund that supports children’s learning in poor countries by making improvements in their countries’ education systems.

Ms Albright said funds were strengthening work in developing countries by helping them ensure children in classrooms are getting a quality education and all the benefits that flow from it.

A key focus of the partnership is boosting teaching quality and ensuring girls and young women, in particular, have equal access to high quality education.

She said the partnership was working actively with developing countries such as Afghanistan to train and recruit more female teachers.

It is also supporting very poor countries such as Chad to deliver quality education to children, especially refugees who have sought protection from regional terrorism and civil war.

Stronger economies
She said early childhood learning programmes have been proven to boost students’ performance in school and as they enter the workforce, contributing to stronger economies and more prosperous societies.

Irish Aid is hosting a meeting of the board of directors of the Global Partnership for Education in Dublin’s Convention Centre this week.

The Partnership has chosen Ireland as the venue for its annual meeting in recognition of the role which education has played in Ireland’s economic and social development.

Taoiseach Leo Varadkar was also scheduled to host a private meeting with the chairperson of the Partnership, Julia Gillard, formers Australian prime minister.