Schools are finding it increasingly difficult to recruit teachers. We look at the challenges facing the profession 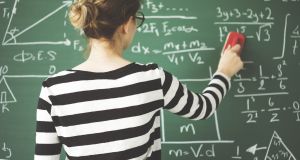 Secondary school teachers are trained through a two-year postgraduate masters in education, meaning most will have to spend six years at college. Photograph: iStock

Even the best schools, teachers and principals have problems that are outside their control. Schools don’t operate in a vacuum: education is highly political and schools are impacted by fluctuations in funding, cutbacks and the availability of teachers. We took a look at some of the wider issues in education and what’s pushing the buttons of teachers.

Teachers are becoming increasingly difficult to recruit for a number of second-level subjects, particularly maths, science, technology, home economics, Irish and modern languages. As revealed by Irish Times education editor Carl O’Brien in January, the number of applications to second-level teacher training courses in the four constituent universities of the National University of Ireland (UCD, UCC, NUI Galway and Maynooth University) has dropped from 2,821 in 2011 to 1,068 in 2017, although the Department of Education says the number of graduates has remained reasonably steady.

This may be one factor in the decline, but the cost of the course – between €10,000 and €15,000 – is likely to be another. Where teachers do graduate, Irish schools are finding it increasingly difficult to compete with schools in the Middle East, the US, Canada, Australia and New Zealand, which offer either significantly higher wages and the chance to save a deposit for a house and pay a decent portion of it upfront, the chance of adventure and an excellent standard of living in a warmer climate, or both.

John MacGabhann, general secretary of the Teachers Union of Ireland (TUI), says teachers can now find better career options in parts of the private sector. “In home economics, they can find well-established, good, permanent employment in the agri-food sector and elsewhere. Science teachers are being recruited into the tech and science industries. Modern language teachers are being sought by the same industries and there is a dearth of Irish teachers at a time when the demand for education through the medium of Irish is continuing to rise. And technology teachers can find good opportunities in the building and design industries.”

After the 2018 teacher union conferences, the Government entered into talks with the three teacher unions on the issue of pay inequality. During the last recession, a two-tier payscale emerged which saw teachers appointed after 2011 paid less than their colleagues for the same job. The issue has been incendiary ever since and led to a lot of bitterness and anger among those on a lower salary. Through negotiations, that pay gap has now closed from 27 per cent to 8 per cent.

MacGabhann says this is about more than justice, equality and fairness. “Yes, teachers are charged with inculcating those values when they are being treated unjustly, inequitably and unfairly. But the impact has been that people have been less attracted to the teaching profession than they may have been otherwise. We’re not getting the same proportion of graduates attracted to teaching, and we’re losing a portion of those who do come in because they’re finding they don’t have a sustainable income from teaching. Teachers have always had a sense of vocation, but they also have to concern themselves with how they can live.”

The cost of living

“The Government has abjectly failed to regulate the market in a fair manner,” says MacGabhann. “They have excessively relied on the private market to deliver homes. The rental crisis and their failure to engage in a housing programme that could be delivered by local authorities is particularly bad in Dublin, but it’s not confined to the capital. Young people can’t buy a home. With that, the belief that teaching is a well-respected and reasonably paid career that is valued by Government and, by extension, society, is taking a pounding.”

“A second-level teacher might not commence employment until the age of 26,” says MacGabhann. “They’re doing six years of unpaid study in the midst of a teacher supply crisis, during a time when salaries fell, promotional opportunities have diminished and casualisation of the workforce has become more common.”

Teachers are increasingly concerned about “initiative overload”, says Moira Leydon, assistant general secretary of the Association of Secondary Teachers, Ireland (ASTI). “While many of these are designed to complement and link in with other initiatives – such as the new junior cycle curriculum tying in with the numeracy and literacy strategies – teachers don’t necessarily experience the changes as complementary. Instead, the pervading sense is that one ministerial project follows another in quick succession. It can feel like a rolling tide, in the context of schools having suffered guidance and other cuts during the austerity years.”

Leydon says morale has suffered and teachers feel there is too much bureaucracy. “Teachers feel that, if society coughs, schools are expected to develop the vaccine. There’s a lot more pressure on schools these days to be active in the formation and socialisation of young people but they are not receiving the professional supports to enable them to perform this role.”

“Schools have long since recognised their overarching obligations to society,” says MacGabhann. “They look after the children of a community and it is very serious and precious responsibility. But we can’t expect schools to have the panacea for all society’s ills. Parents don’t necessarily expect it, but the ramping up of expectation has come by way of additional regulatory demands, and an explosion in workload without the compensating time being given for staff resources.”

In a speech to delegates at last October’s annual conference of the National Association of Principals and Deputy Principals, the recently-appointed Minister for Education Joe McHugh said he had heard teachers’ concerns on this issue and he would slow the pace of change to “take stock of where we are, what is working [and] what is not working.”

MacGabhann says it perfectly legitimate and right that schools are inclusive of young people with special needs but that the ancillary services needed to support this, such as speech therapists, are not available at the level needed. “Resource us and we can do all of this.”

Class sizes are often discussed at primary level, where there is currently an average of one teacher for every 26 pupils, although some schools still report larger class sizes.

At second-level, the issue is more complicated because, as well as being influenced by the pupil-teacher ratio (PTR) – currently set at 19:1 – it’s also impacted by factors such as time-tabling and the demandsamong students for certain subjects.

David Duffy, education and research officer with the TUI, says even though there is one teacher provided for 19 students, “it does not mean that there are only 19 students in every class group as this allocation has to cover the full breadth of subject options across the curriculum and the significant, varied requirements of managing a large school community”.

There is no up-to-date data on class sizes at second-level, but Gemma Tuffy of the ASTI says that in 2007, when the teacher allocation was 18:1, the union conducted research on class size which found that 64 per cent of third-year students were in classes of 25 or more students, while a further 16 per cent found themselves in classes of 30 or more. In the same survey, 90 per cent of teachers agreed that large classes affected their ability to give individual attention to students.

“Since then, the teacher allocation has disimproved,” says Tuffy. “This has led to larger classes. In addition, the mainstreaming of students with special education needs, who typically amount to between 18.5-20 per cent of the student population, has significantly added to the complexity of classroom teaching. In today’s classroom, the curriculum focus is increasingly on active learning methodologies, teamwork, presentations and skills development. In this context, large class size can be inhibiting and impact on the amount of non-teaching work undertaken by teachers, including marking homework and preparing laboratories.”

Duffy says the addition of new subjects, including computer science and physical education for exam purposes, will require the PTR to be lowered. However, he points out the current problems in recruiting and retaining teachers could cause the PTR to worsen despite the best intentions of policy-makers to increase it.