Expelled at age 10: ‘He hasn’t been at school for over a month. I’m heartbroken’ 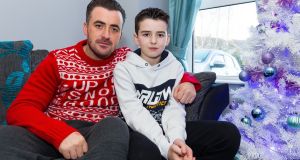 Ernest Draper and his son Matthew (10), who has been expelled from his local school. “We have done everything we can to help,” says Draper. Photograph: Tom O’Hanlon

Matthew Draper is 10 years old. He loves to draw. He wants to be a gamer when he grows up. But, for now, all his father wants is for him to be allowed return to his primary school in Athlone.

Ernest Draper’s son was expelled in October. “He hasn’t been in school for over a month now. I’m heartbroken, honestly heartbroken.”

Matthew started in the school in 2012 and from the outset he struggled to manage his behaviour.

“We noticed outbursts of violence and aggression towards other kids,” says Draper.

These behaviours were also noticed by the school and Draper worked with the then principal to get his son assessed.

He was also diagnosed with oppositional defiance disorder, defined by education services as a “a recurrent pattern of negative, defiant, disobedient and hostile behaviour towards authoritative figures in particular”.

It became clear that if Matthew was to be able to engage with mainstream education, he needed expert support.

We have done everything we can to help. We’ve tried to work with the school. There’s nowhere else for Matthew

Matthew was prescribed Medikinet to help him manage his behaviour in school.

His father describes how “the medication gave him the extra few seconds to think before reacting”.

Along with resource hours, Matthew was allocated access to a special needs assistant (SNA). It took several applications, coupled with petitioning by Matthew’s father, before he was granted a full-time SNA by education authorities.

“The SNA is vital to his schooling,” says Draper. “She settles and encourages him.”

The services of the HSE’s child and adolescent mental health services were also enlisted to help tackle his challenging behaviour.

Matthew’s father reported the positive impact they had.

“When they got involved we were able to work out a behaviour plan for Matthew,” he says.

It involved homework passes, movement breaks and a “red card” system which allowed Matthew to flag his own behaviour.

But the challenging behaviour didn’t dissipate.

The incidences of aggressiveness and bad language continued, resulting in several suspensions and a reduced school day for Matthew.

His father reported that these sanctions only served to deepen Matthew’s negative relationship with school.

“Gradually he fell behind in his work and because of this he wouldn’t apply himself. It got worse over time,” he says.

It was following an incident in which Matthew absconded from school that an application to expel him was finally put before the school’s board of management.

Draper feels his son has now been abandoned by the school and fallen through the cracks of the education system.

“We have done everything we can to help. We’ve tried to work with the school,” says Draper. “There’s nowhere else for Matthew. He doesn’t qualify for a special school. He’s in a crack. Everyone he knows and the relationships he made throughout his childhood are there in that school.”

Expulsion from primary schools are relatively rare, but they are on the increase.

Figures from Tusla, the child and family agency, show that there were 28 expulsions from primary school in 2017/18 compared with 19 the previous year.

Their rarity, however, does little to reduce the impact they have on both the student and school involved.

June Tinsley, head of advocacy at Barnardos, has witnessed the impact suspension or expulsion can have on a young person.

“From the child’s point of view, they feel a sense of exclusion and confusion, they feel that they are not worthy,” she says.

She also warns of overgeneralising a topic which is complex and defies simple solutions.

“It’s so individual specific in terms of the circumstances and the young person involved. When a child is presenting with very challenging behaviours, those behaviours are manifesting because of something else,” she says.

One thing that is common, however, is the reluctance of anyone involved to find themselves in the situation.

“Nobody wants to go there,” says Pat Goff, deputy chief executive of the Irish Primary Principals’ Network. “There are no winners with expulsions.”

Before a school can apply to expel a student, they must have exhausted all possible avenues to support the student and manage the behaviours.

“If the school has tried every single methodology and it has still failed, then you have to raise the question – would the child be better served in another school?” asks Goff.

Simon Lewis, principal of Carlow Educate Together, has experience of the expulsion process.

“We have only ever expelled a student in cases of extreme and repeated violence,” he says.

Lewis describes the balancing act schools find themselves in as they try to address challenging behaviours, while also upholding the duty of care they have to other students and staff.

“You hope you can get through to what is causing the behaviours but, when you have repeated incidences of violence, that’s a problem. You have to respect the other kids and the staff.”

But, if nobody wants to expel, then why does it happen?

The most common reason identified is the lack of access to suitable qualified personnel.

Teachers are not trained to provide the therapy outlined in psychological reports.

“There aren’t the resources there to support children with behavioural needs,” says Lewis.

Timing of access to these therapies and supports also needs to be addressed. “It all comes down to early intervention, the minute they walk in the school door that’s when the interventions need to happen,” adds Lewis. “By the time they get to fifth and sixth class, it’s too late.”

A recent report published by Barnardos show the barriers many children face in accessing services.

There are a staggering 37,400 children waiting for mental health, speech and language or disability services nationwide.

There is also a postcode lottery, with children in some areas waiting longer than others.

In the Cork-Kerry region, for example, some 29 per cent of children are waiting more than a year to access mental health services.

Experts agree that the key to tackling managing challenging behaviour is early intervention. Many also argue that these services should occur in schools themselves.

In May this year the Government launched a project that could hold the key to to addressing some of these needs.

The in-school therapy demonstration project is a programme that aims to meet the needs of both the student and the school involved. The project is being piloted in 75 primary schools and 75 pre-primary school settings.

Through a network of regional teams, the project aims to offer access to speech and language and occupational therapy in an educational setting.

This project offers hope that early intervention supports and therapies can finally be accessed by schools if and when they are needed.

For now, though, many schools must continue without this service and, for Matthew Draper, it has come too late.

Expulsions and suspensions: in numbers