ASTI president hits out at petition to suspend industrial action

Some members gathering signatures for special convention to reverse strategy 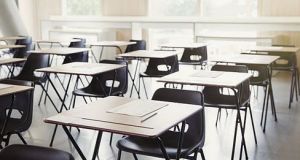 ASTI is the only public sector union not signed up to the Lansdowne Road agreement. This has triggered financial losses for members and delayed access to contracts for new entrants to teaching

The president of the Association of Secondary Teachers, Ireland (ASTI) has strongly criticised moves within the union to gather a petition calling for the suspension of its current campaign of industrial action.

The union’s leadership was at the centre of criticism from some members during its annual convention last week. They argued the ASTI’s industrial relations strategy had left it isolated as the “North Korea” of the trade union movement.

ASTI is the only public sector union not signed up to the Lansdowne Road agreement. This has triggered financial losses for members and delayed access to contracts for new entrants to teaching.

A number of members have begun gathering signatures from teachers in a bid to debate a motion to suspend the union’s industrial action and restore losses and contracts to teachers.

A bid to have this motion debated at last week’s convention was voted down. However, under the union’s rules a total of 800 members’ signatures can trigger a special convention.

A letter to teachers is signed by Brendan Broderick, a former president of the union, and Noel Buckley, a Tipperary-based teacher.

In response, ASTI president Ed Byrne said the petition had not been approved by officers of the union, and the fact it had not been sent to all members “calls into question its democratic nature”.

He said the membership had voted this year to reject settlement proposals drafted late last year relating to pay and the union’s opposition to junior cycle reform .

He urged members to “respect the mandate” of the ballot, and says a move to revisit the vote could have implications for any future ballots.

The letter signed by Mr Broderick and Mr Buckley criticises the union’s current strategy, and says any gains will only be made through the coming pay talks.

What’s the difference between the Dáil and a bag of mice?