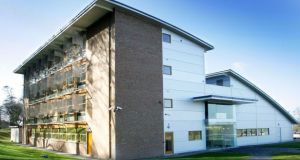 ArcLabs innovation centre at Waterford Institute of Technology has been home to more than 60 start-up companies.

An independent review into the sale of intellectual property by third-level colleges has found weaknesses in the way conflicts of interest among research staff are managed in the sale of lucrative spinout companies.

The review was prompted by concerns raised at the Dáil’s Public Accounts Committee last year over potential conflicts of interest in this sector, particularly where research staff are also shareholders in companies that end up being sold for large sums of money.

The report commissioned by the Higher Education Authority concluded that policies in higher education institutions for commercialisation work were broadly in line with international good practice.

However, it found areas of weakness and a lack of clarity in some areas, such as policies for managing of conflicts of interest and decisions around the equity stakes institutes take in spinout firms.

It found institutions should take more responsibility at a senior level to put robust conflict of interest management systems in place and to monitor their implementation and effectiveness.

While these policies were well-recognised, responsibility tended to be placed on the individual rather than taken collectively within the college, it found.

It also found a need for greater clarity across the sector around the approach to be taken to determining equity stakes.

The review provides ten key recommendations which, it said, would strengthen IP policies and management of conflicts of interest relating to the commercialisation of IP from colleges.

In a statement, the Higher Education Authority said process of implementing the recommendations had already commenced.

The authority’s chief executive Dr Graham Love said there has been rapid change within many of the higher education institutions in Ireland, with an increased emphasis on IP commercialisation and on enhancing links with industry.

“Good progress has been made, and the implementation of the recommendations of this review will result in simpler and more accessible IP policies and more robust management procedures,” he said.

Much of the Public Accounts Committee’s concerns had focused on the potential conflicts of interest surrounding the sale of a company co-located at Waterford Institute of Technology (WIT).

FeedHenry, a mobile software company incorporated at WIT, was sold to an American multinational company in September 2014 for €63.5 million.

WIT, which owned 3.1 per cent of the company’s shares, received €1.3 million. Willie Donnelly, WIT’s current president, was vice-president of research at the time of the sale and owned under 2 per cent of FeedHenry’s shares.

Mr Donnelly insisted at the time that his interests were fully declared at all times and he was was not involved in decisions over the commercialisation of research.

He played a central role in the creation of WIT’s research and development institute – the Telecommunications Software & Systems Group – which has helped created more than 600 jobs in the region.

In a statement, WIT said it welcomed the review which provided the institute with an opportunity to review its own framework against the report with recommendations with a view to enhancing it as required.

“We are committed to continue to drive the social and economic development of the region through our excellence in research and innovation,” it added.