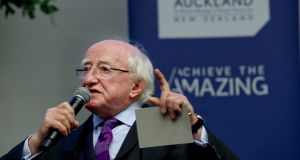 President Michael D Higgins is seen during a speech to the University of Auckland on Friday as part of his visit to New Zealand. Photograph: Maxwells

People should be encouraged to speak Irish, rather than having it forced upon them, President Michael D. Higgins has declared.

Speaking in Auckland on Friday during the fourth day of his State visit to New Zealand, the President criticised the “authoritative” nature of Irish language teaching that had existed in schools in the past.

Asked if “making Irish compulsory” in schools was “a help, or a hindrance”, the President gave a detailed reply, drawing on an essay by one of his predecessors, Douglas Hyde who had argued in favour of the replacement of English by Irish.

“English had been imposed on Ireland in a number of ways. At one time you wore a stick around your neck and you put a notch every time you used an Irish word and when you went to school the following day you were punished based on the number of marks.

“Then again I remember in my time, people referring to the Irish language, they would say about English, ‘It’s what you needed for the boat’ because our people had to learn English to go abroad because of migration,” he told the Auckland audience.

However, President Higgins said he believed that Hyde’s argument had been wrong: “I think myself that it was a mistake and I understand how it came to be written but I don’t agree with it. There’s a reason why Hyde himself spoke five languages - he was very influenced by Hebrew, he also spoke his wife’s German...”

Welcoming the changing climate for the teaching of Irish, the President said:

“You must encourage and lure them to the language, make the language attractive, the language needn’t stand for every antiquated authoritarian idea that was ever dreamed up and imagined in ancient Irish, for example.

“I remember in other times people foisted attitudes onto the language that really had nothing to do with the essential spirit. It is a language of life and, thankfully, it is being spoken more and more by young people,” he said.

Eamon De Valera’s time as Taoiseach “saw all the state servants change their names to Irish as if that was going to revive the subject” , he declared: “You then move on and where are we now. We have primary schools teaching Irish which is good, and secondary schools that are all Irish and teach subjects through Irish.”

The topic is of interest to New Zealanders currently following the result of the recent election. Prime minister Jacinda Ardern’s Labour party campaigned on further integrating the Maori language into all primary and intermediate schools and having it as an option in secondary schools.

During the election, ACT party leader, David Seymour, however, compared learning the Maori language in schools to Ireland’s experience.

“Look at the Irish,” he told media at the time, “they’ve had compulsory Gaelic for 90 years, it’s turned Gaelic into sort of the Brussels sprout of languages in Ireland. People eat it only because they’re forced to and it makes them resent it.”

* This article has was amended on October 27th 2017. The original reported that President Higgins had said that making the Irish language compulsory had been a mistake.