Number at third level with disabilities triples over a decade 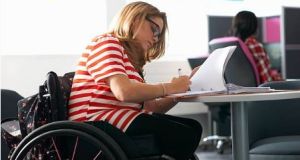 The number of people with disabilities attending third level or higher education has grown from 3,800 in 2008 to more than 12,000 students this year. File photograph: Getty Images

The number of students with disabilities in third level or further education has more than tripled in a decade, new research shows.

The dramatic increase is linked to more than €70 million which has been spent on improving access and supports for vulnerable students.

However, funding per individual students has dropped by about a third in that time as resources have not kept pace with the growth in student numbers.

The numbers of people with disabilities attending third level or higher education have grown from 3,800 in 2008 to more than 12,000 students this year.

A specific fund for students with disabilities was set up in 1994 to support full-time students who faced major challenges in accessing higher or further education.

An independent review has found that while the number of students in receipt of support has grown significantly over the past decade, the overall level of funding has remained broadly the same.

It notes that all indications are the number of applications is set to keep rising. If funding levels are not increased, it says funding per student will continue to drop.

“Institutions will face further challenges in addressing growing demands for support,” it says.

The report also said administrative delays mean that new students can be halfway through their academic year before they receive supports, and some may drop out before reaching this point.

It makes a number of recommendations on where improvements could be made.

They include the need for a more robust model of allocation, the extension of the fund to part-time students and, over time, the transfer of the further education element of the fund to Solas.

Dr Graham Love, chief executive, of the HEA, welcomed the report’s overall finding that the fund has played a vital role in supporting the evolution of services and supports for students with disabilities in Irish higher and further education.

He said the HEA will begin implementing the report’s recommendations immediately.

Minister for Education Richard Bruton said ensuring our education system is inclusive and meets the needs of all our students was a key priority.

“The fund plays a vital role in ensuring students with disabilities can access and remain in further and higher education, by helping students overcome obstacles which might otherwise hinder them from completing their course,” he said.

The fund available to students with disabilities attending both further and higher education courses and to students attending approved courses in Northern Ireland, the UK and EU.

The fund is managed by the HEA on behalf of the Department of Education and is co-funded by the Government and the European Social Fund.