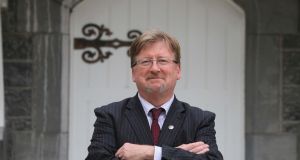 Professor Brian Norton, president, DIT: a spokeswoman confirmed that he provided the PAC with the EY report in recent weeks. Photograph: Nick Bradshaw

The governing body of Dublin Institute of Technology (DIT) has ordered its president to provide an unpublished report which is highly critical of senior managers for serious failures in financial governance to the Dáil’s Public Accounts Committee (PAC).

The move comes as senior officials from DIT and other third-level colleges appear before the committee Thursday to face allegations that they misled TDs over the way they run their financial affairs.

The president of DIT Prof Brian Norton has been accused by TDs of withholding a sensitive report commissioned by DIT’s governing body into the loss of more than €700,000 in up-front payments to an academic journal provider which went bankrupt.

Instead, Prof Norton provided a “management review” report to the committee which omitted strong criticism of senior managers but included general findings and recommendations.

Following the airing of an RTÉ Investigates programme into mismanagement in higher education institutions, DIT’s governing body held a special meeting to discuss the findings.

At the meeting on May 30th, it is understood Prof Norton was directed by DIT’s governing body to immediately provide the report to the committee.

It also instructed the president to note the governing body’s “regret and concern” that this had not been done, and to apologise for the delay.

In addition, it directed that extracts from minutes of governing body meetings be sent to the committee which were highly critical of senior managers.

One of these meetings, held in June 2015, noted the governing body’s “grave concern and dismay” at the “failures of governance, the errors made, the lack of transparency in accountability” highlighted in the EY report.

In a statement, a spokeswoman for Prof Norton confirmed that he provided the PAC with the documents in recent weeks.

She also rejected claims that the committee had been misled by not providing the report until now.

“We provided all information in response to questions from the committee, both in writing and at the committee hearing,”she said.

“No information on the issue of the financial loss or any other issue has been withheld from the Comptroller & Auditor General as our auditors, or from the committee”.

She said all information, including the EY report, was made available to the Comptroller & Auditor General and that notes in the college’s accounts clearly highlighted the loss.

The EY report found that the lapses in governance surrounding the loss of more than €718,000 were not isolated incidents.

In fact, it found that some €29.5 million over a three-year period was not subject to proper checks and balances.

In relation to the losses linked to the UK supplier of academic journals, it found that no formal contract could be found.

The college’s decision to pay money up-front did not go through standard purchasing procedures, which would have involved review procedures;

It also found there was no challenge from the finance department to such a large payment in advance to avail of an “early payment discount” worth just over €4,000.