The biggest Stem employer is Amazon.com; surprisingly, Facebook and Google don’t even make the top 10 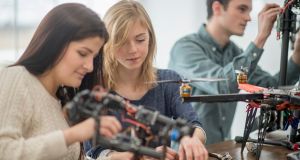 We know that there’s plenty of jobs in science, technology, engineering and maths. Most of these articles are focused on encouraging you to pursue one. But if you’re already fairly happy with the idea of a career in Stem, who are the big employers and how do you go about getting a job with them?

Data compiled for The Irish Times by Mariano Mamertino, EMEA economist at the Indeed hiring lab, suggests that most of these jobs are in information and computer technology followed by civil, chemical and industrial engineering. The biggest Stem employer, meanwhile, is Amazon. com; surprisingly, Facebook and Google don’t even make the top 10. Indeed.ie’s data also shows that the “mismatch score” fell; this means that the skills gap increased as there was a higher number of Stem jobs available to match a decreased interest by jobseekers. It has become more difficult to find the right talent to fill open roles.

Prof Mark Ferguson is director of Science Foundation Ireland. “The data clearly shows that if you have a science qualification, you have skills in research, assessing evidence and weighing up counter-proposals. This opens up a huge array of careers. People with science qualifications make more money and progress faster in their career.”

Ferguson says that there remain obstacles to encouraging young people to choose Stem careers, and that concern about fitting into a college course tops this list, as is what their parents think; as a result, they are working to reach students and parents to show them the benefits of a Stem career and to address any concerns or preconceptions they may have.

One of the most common preconceptions is that scientists are holed up in a lab wearing a white coat, but there are so many different roles in different companies, in the public service and in academia. “Paddy Power (bookmakers) employs a huge number of highly-skilled mathematicians,” says Ferguson. “We might think of engineering as a male-dominated role full of muddy boots, but it can also be sophisticated design. Part of what we are trying to do at SFI is change perceptions.”

There are dozens of jobs included in the Stem category. Yes, you can be an astronaut, as unlikely as it is. But architectural and engineering managers, cost estimators, computer systems analysts, software developers, actuaries, mathematicians, agricultural engineers, biomedical engineers, environmental engineers, nuclear engineers, animal scientists, food scientists and technologists, microbiologists, zoologists and wildlife biologists, foresters, physicists, chemists, hydrologists, atmospheric and space scientists, science teachers, psychologists, dieticians, graphic designers and wind turbine service technicians are among the roles available in this diverse sector. So, what’s it to be?

In promoting jobs in Stem, Ferguson is acutely conscious that we need to work on persuading people to work in jobs that do not yet exist. “Phone app developers didn’t exist 10 years ago and data science was not a huge employer. We don’t know what the jobs of the future are yet – autonomous (self-driving) vehicles are one likelihood – but we do know that training people in the fundamentals of science will help people to get these jobs.”

He points to a “T-shaped” strategy for developing skilled people to work in Stem. “The vertical arm refers to the depth of skills such as critical thinking and problem thinking, while the horizontal part of the T refers to specific training for the huge opportunities that are available in ICT, software, pharma and medical devices.”

Much of this employment is generated by big firms, but there are also new and emerging opportunities in smaller and start-up firms. These are supported by initiatives such as Enterprise Ireland’s innovation voucher scheme which connects academics with businesses to work on research projects, as well as by SFI’s 12 research centres which carry out cutting-edge research that is relevant to industry and which has received €200 million in funding from industry and €350 million from SFI. These research centres include data analytics centre Insight, advanced materials and bio-engineering centre Amber and the Irish Photonic Integration centre among others.

“These have created companies and are allowing existing firms to build their research and development capacity with industry,” says Ferguson. “These centres are engaged in cutting-edge research that is relevant to companies. Take some of the work that is going on in healthcare: the SFI-funded centre Infant (Irish centre for fetal and neonatal translation research) which looks at disorders of pregnancy and the first few years of life: premature birth is prevalent due to pre-eclampsia and the centre has found a way of determining which women may be susceptible to this, so they can be screened and have extra care taken of them. A commercial spin-out company will provide jobs but this work is also very important for people and for society so it has both an economic and a human bottom line. Over at Amber, they have worked with a commercial company and discovered a way of making graphene: an academic paper was produced and the technology has been licensed and patented.”

Stem remains an area where a single individual can still have a big impact. “Stars matter,” says Ferguson. “Prof Smolic is an expert on digital video and has a huge number of excellent publications. On the basis of his work and the SFI-funded Adapt (centre for digital content technology), we made a decision to invest in an R&D centre in Dublin, which employs 80 people. The presence of Smolic and SFI support was crucial: world-class research attracts investment and creates jobs.”

The tech sector employs over 120,000 people in business and technology roles. This is an astonishing 50 per cent increase from 2010.

“Many of these people are working in companies that did not exist 10 years ago,” says Paul Sweetman, director of Technology Ireland which represents the tech sector. “It continues to be the case that where one company finishes a recruiting round, another has a major jobs announcement. Already, over 2,000 jobs have been announced by the tech sector in 2017. Tech talent is the fastest growing skills demand in Ireland.”

Figures from the IDA show that over the period of 2013 to 2015, demand for tech professionals grew by 83 per cent compared to the period 2010 to 2012. Figures from Enterprise Ireland show that the indigenous software sector grew exports by 32 per cent in 2015, to reach €1.9 billion.

“That is huge growth in itself but it is the comparison to other sectors that is most telling: the average export growth in 2015 for all Enterprise Ireland-supported companies was 10 per cent,” says Sweetman. “Since 2011 over 31,000 jobs have been announced by large, small, indigenous and multinational tech companies – approximately 100 jobs per week. It is an incredible story and we are just at our beginnings. The current market size of the global tech sector is over $4trillion (€3.6tr) and this is expected to grow more than 30 per cent by 2020. This growth will happen somewhere and should Ireland continue to bolster its competitive advantages of skills, talent and business-conducive environment, we will be well placed to capitalise on that growth as we have done over the past 10 years.”

However, he cautions, the skills needs of the sector are not just about science, tech, engineering and maths. “Business acumen and savvy, critical communication skills, teamwork, project management and the ability to embrace and be comfortable with ambiguity are important too. Employers are looking for those who can work hard and be entrepreneurial as well as those who can cope and thrive in change, so tech companies will require both Stem and non-Stem graduates.”

There are new and emerging routes into the sector, including the ICT associate professional programme which is co-ordinated by FIT (FastTrack to IT, an industry-led initiative that works with government departments and national education and training agencies).

“This is a solid example of what new technology apprenticeships can achieve. The programme matches study and academic achievement with in-depth and consistent experience in the workplace. Businesses are also developing their own company-specific “academies” where tech talent is identified and advanced at an earlier stage, and participants in these programmes may have already developed deep technical skills through extracurricular activities such as CoderDojo.”

Beyond the graduate placement demands in the sector, Sweetman says that Ireland has built an international reputation as a location to build a senior career in the tech sector. “Technology Ireland will work with policymakers to enhance this offering and encourage greater decision-making roles to be housed in Ireland. For those entering the tech workforce, seeing such a career path is highly attractive.”