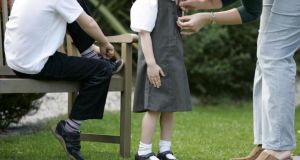 The Department of Education does not have any power to force schools to cut the cost of uniforms or books for parents, according to internal records.

However, an internal memo prepared by a senior official states that the circular has “no more than authority than any Department circular . . . furthermore, there are no ready sanctions that can be applied when schools fail to comply”.

A spokeswoman for the department said yesterday that all schools were expected to carry out the provisions in the circular.

She added that it was intended to reward schools who provide evidence of having adopted the principles of cost-effective practice through premium capitation grants for schools.

The department has confirmed that no school has yet been rewarded on this basis.

The development comes as groups such as the Society of St Vincent de Paul and the Irish League of Credit Unions have warned of the pressure facing parents to pay for uniforms, books and “voluntary contributions”.

Separately, the Department of Social Protection has told The Irish Times it is receiving about 500 applications a day for the back to school clothing and footwear allowance.

The volume of applications for the payment – worth between €125 and €250 – has led to a backlog which the department says it is working to process as quickly as possible.

It has already been paid automatically to more than 127,000 families, a figure is on a par with applications last year.

The payment of the “voluntary contribution” is also set to become centre stage at an Oireachtas committee this week.

Children are being denied school lockers or blocked from school activities on the basis that their parents have failed to pay “voluntary contributions”, according to parent groups.

Official directives state that schools are entitled to request financial contributions from parents on the basis that it is made clear there is no compulsion to pay.

However, the National Parents’ Council Post-Primary says many voluntary contributions are effectively compulsory despite these rules.

“We consistently and frequently receive calls from distraught parents to report that their children have been denied lockers at school, not allowed to participate in transition year or some other school activity or similarly penalised because their parents were unable to pay ‘the voluntary contribution’,” the council says.

The comments are contained in the council’s submission to the Oireachtas education committee, which is due to hold a special series of meetings on school costs this week.

A survey of almost 1,800 parents by the National Parents’ Council at primary level indicated that most parents (76 per cent of respondents) are asked to pay a voluntary contribution each year to help with school finances.

A majority of parents (54 per cent) feel under pressure to pay the contribution. This is likely to be linked to the fact that most schools do not anonymise the voluntary contribution request.

The council says this practice raises “serious questions as to how voluntary this contribution is in reality”.

It also found a lack of transparency on financial issues in schools, with one in three parents stating they did not know how the contribution was spent.

Similarly, only one in five parents said the school made its financial accounts available to parents.