Earn while you learn: What you need to know about apprenticeships 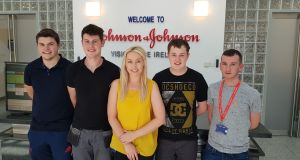 College has long been sold as the be-all and end-all of education. In recent years, however, that narrative is changing.

In 2014, Solas took over the functions of training agency Fás, and it quickly set about implementing a long-overdue reform and restructuring of apprenticeships. Instead of funnelling young people into college courses they don’t really want and which may not be the right for them, apprenticeships offer a chance to learn on a further- or higher-education course, work and learn on the job, and earn money while they’re at it.

Nikki Gallagher, director of communications at Solas, says apprenticeships are a bridge between education and enterprise. “The number of apprentices is on the rise, with about 13,000 registered at the moment and 36 live courses. Learning and earning on the job has served the test of time in areas such as engineering, construction, motoring, carpentry and plumbing. Aircraft maintenance is a hugely popular option and receives more applications than there are places. We have moved into new areas including finance, information and computer technology (ICT) and hospitality, and now we’re looking at expanding the apprenticeship system into areas like auctioneering and property, logistics, integration engineering and sous chef.”

Apprenticeships have often been associated with men and trades and haven’t always been popular with children of middle-class families. But that too is changing with an increasing number of mature students and students from more affluent backgrounds coming on board. Gallagher says education has to be about what a learner is interested in, not their gender or socio-economic background.

“The new apprenticeships are attracting significant interest and people are seeing it about realising their best potential, not where they live. [Educationalist] Ken Robinson says that education is not just about how to get a particular job but how you develop the skills and potential you need to thrive in your life. You can get 600 points in your Leaving Cert and still go on to do an apprenticeship in carpentry or insurance practice, because that is what interests you. We need to support people in finding the right pathway for them and guidance counsellors are seeing this is a really good option for their students.”

There are still far more men than women in the traditional apprenticeships, but Solas is working hard to change this. “It doesn’t make any sense that an employer only talks to half the population, although we are slowly seeing increased female participation and trends are positive. Nor does it make sense that we value someone based on the course they do and the prestige of that course: CAO points are determined solely by supply and demand.”

Gallagher says the apprenticeship system needs people with the right interest and aptitude to develop their skills. “They can be for people who know what they want to do. They offer varied paths, and people who do them need skill and talent to successfully complete them. They can be tough, they are challenging, but the outcomes are fantastic and students earn money as they learn. For many people, they will be the best option, and they deserve a look.”

This year, there will be an apprenticeship presence at The Irish Times ‘Higher Options’ conference (September 12th-14th), where Leaving Cert students will be able to discuss all their apprenticeship options.

Apprenticeships: what you need to know

How can people apply for an apprenticeship?

An applicant must be at least 16 years of age and have a minimum of grade D in any five subjects in the Junior Certificate or equivalent. However, higher educational qualifications and other requirements may be sought by employers.

To begin an apprenticeship, an applicant must be employed by an approved employer. Apprentice employers manage their own recruitment, with many using online recruitment channels such as Ireland. ie">JobsIreland.ie, indeed.ie, IrishJobs.ie and other recruitment sites.

Apprentices earn while they learn and build valuable work-ready skills in a chosen occupation. Apprenticeships open up exciting and rewarding careers, with learning grounded in the practical experience of undertaking a real job. Apprentices who successfully complete their apprenticeship are awarded qualifications ranging from levels six to nine on the National Framework of Qualifications. Other benefits include:

- Between two-four years in duration

- Apprentices are employed under a formal contract of apprenticeship

The employer and the apprentice

In 1992, Brendan Kearns was one of the founders of Designer Group, which employs more than 750 people in mechanical and electrical engineering services around the world. The company employs 170 apprentices in Ireland.

Mark Fitzgerald (30) is one of those apprentices. A former landscape gardener, he decided to change direction and is now in his first year of a plumbing apprenticeship.

Brendan: “We started with a small number of apprentices and, as we grew, so did our numbers. Now we take them on every two months in blocks of 10. We try and keep as many as we can, with some wanting to move on and move away, to see the world or continue their education. I’ve been in charge of apprentices for the last two years.”

Mark: “There wasn’t enough work for me in landscape gardening. I was initially reluctant, in my late 20s, to take on an apprenticeship because the wages aren’t brilliant for the first year, but I know that the money will get better over the four years of training. Why plumbing? I knew some qualified tradespeople before I started – four or five electricians but not one decent plumber, so I knew there was work there.”

Brendan: “The apprentices work well, progressing through seven phases including four with the employer and three with the training authority. If they’re having any trouble with their theory or their practical or theory, we can and do help and assist. We’re going out to schools at the moment, talking to transition year students and encouraging them to consider apprenticeships. We really do want more women to come and work with us and we value the skills and expertise they bring to the workplace – we’re missing out when we’re not tapping into the full talent pool.”

Mark: “The first few weeks are about finding your feet and the employers can quickly see where your strengths lie. I was paired with a qualified man who had been plumbing for 15 years and he really put faith in me and showed me the ropes. I do the training in the College of Further Education in Finglas. Most of the students I’m sitting beside are younger than me, and the guy I sit beside is 17. We’ve been given a lot of backing and support and I was delighted to win the Generation Apprentice competition where we got a chance to show our skills. I feel I will have lots of options when this comes to an end.”

“My aptitude test said I would be good at engineering and technology. So of course, I assumed that the woman running the test was mad, although I did always have an interest in how things work. I used to watch my dad strip off his bike and my granddad work in carpentry and I loved the idea of fixing things.

“After school, I did a photography certificate in Limerick College of Further Education, but I didn’t work in photography. A stint in medical device firm Boston Scientific followed but I was commuting to Galway from my home in Limerick, so I applied for a contractor role in Johnson & Johnson. While I was here, I heard about the manufacturing technician apprenticeship.

“Was it right for me? It’s a two-year commitment with 70 per cent of the time spent in work and 30 per cent in LIT. I got good feedback and encouragement and I went for it. My role involves technical support for our manufacturing operations and we are getting hands-on training.

“I am the only girl in a group of five but I haven’t been treated any different, ignored or shouted down, and I’ve been really supported. Being paid is a huge benefit; I couldn’t go afford to go into full-time education as I have bills and a mortgage to pay. This apprenticeship has given me the chance to work for a big, diverse company, earning as I learn with lots of opportunities to advance.”