Ballyfermot College of Further Education graduate: ‘There are no straight lines in life’ 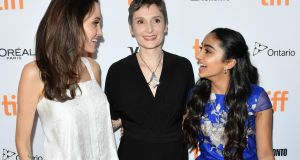 Nora Twomey was 14 when she started drifting away from school. Within a year, she had dropped out. Today, however, she’s an acclaimed animator, Oscar-nominated director and partner in Cartoon Saloon, the award-winning animation studio based in Kilkenny. Her most recent feature film, The Breadwinner, was nominated for best animated feature at the Academy Awards and was produced by Angelina Jolie.

And it was further education that changed the course of her life.

“I was struggling quite a bit in school but doing so quietly,” says Twomey. “If you walked into my classroom you wouldn’t have noticed me. My father had passed away when I was 14 after a long illness and I tended to escape into my imagination quite a bit. As I slipped further and further academically, I became more and more withdrawn. Once I wasn’t creating a visible issue in class, it was quite easy to fall between the cracks. I dropped out completely when I turned 15.”

It was a really difficult time and Twomey drifted for a few years. “I was really vulnerable. I cut myself off from anyone who attempted to help. My mother is quite wise and she supported me in finding my own way back. Initially, she helped me find a job with a local craftsperson for a few years and that gave me some confidence – I felt I could do something worthwhile.”

Twomey enjoyed working and creating, and she went from this position to a factory job for a few years. In her early 20s, her mother and sister helped her prepare an application for an art foundation year at Cork’s Coláiste Stiofáin Naofa, where she learned about the different disciplines open to her.

“I found out about animation careers and Ballyfermot College of Further Education. I began to prepare a portfolio of work to get a place. I really had very little idea about what animation entailed but my tutors in Cork advised me to include as much observational drawing as possible. I did creative exercises from books like The Artist’s Way by Julia Cameron and just tried to show how much I was observing and learning through my drawings.” She applied to Ballyfermot and secured a place.

Ireland now punches above its weight in the animation industry with Twomey’s own studio receiving Oscar nominations in the best animated feature for The Secret of Kells, Song of the Sea and her most recent feature, The Breadwinner, which she directed herself and which was produced by Angelina Jolie.

There’s Brown Bag Films which has produced popular cartoons Octonauts and Doc McStuffins, was nominated for eight Emmy Awards (winning three) for Peter Rabbit and was nominated for best animated short at the Oscars with Give Up Yer Aul Sins and Granny O’Grimm’s Sleeping Beauty. Monster Entertainment’s Earth to Luna is proving popular on Netflix, while Boulder Media has produced a number of cartoons for Disney, Cartoon Network, the BBC and Nickelodeon. The industry is a growing employer and is estimated to be worth €100 million to the economy.

It wasn’t always this way, and the animation course at Ballyfermot College of Further Education, (along with that on offer at the Institute of Art, Design and Technology in Dún Laoghaire) has played a major part in building up Ireland’s prowess in this area.

“Animation was a small industry at the time,” says Twomey. “Sullivan Bluth studios were operating in Dublin, along with a few very small studios, but there wasn’t really a huge indigenous industry like there is today, and there wasn’t the huge demand on college places that there is today. Enthusiasm and a willingness to learn went a long way and because of my rocky experiences with education, I took nothing for granted. The college didn’t have a lot of physical resources but the creative environment was extraordinary.”

She and her classmates studied the human form. They drew from life for entire days. “Sitting on the 78A into town with a roll of fresh drawings under my arm, going to Bewley’s on Grafton Street to sketch people sipping their coffee, it felt like I’d finally found my place. I had a nose piercing and I was an art school cliché! I knew where I was supposed to be.”

One of the highlights of her time at Ballyfermot was a workshop from Glen Keane, known for his animation on The Little Mermaid and the beast from Beauty and the Beast. At the time of his visit, he was working on Disney’s Tarzan. “Watching him draw, listening to how much he loves what he does, and hearing how he just keeps asking questions of his characters no matter what stage of his career he’s at, was incredibly inspiring.”

This year, she sat with Keane, who was nominated (and went on to win) in the best animated short category for his film Dear Basketball at the Academy of Motion Pictures nominee lunch. “I talked to him about how much his words meant to me that day, over 20 years earlier. I told him how his love of drawing and his honesty about his process inspired me through my whole career. Back in college, if I had been able to flash forward to Oscar night 2018, when we’d both been nominated for our respective films, I would have fallen off my chair.”

In college, Twomey met people she still works with today. After college, she got a job with Brown Bag Films. “The studio was just 15 people at the time; now it employs hundreds and is a world-leading animation provider. I worked on Alan Shannon’s film The Last Elk – Alan went on to make Roy, Tilly & Friends among others. When my partners Tomm Moore and Paul Young finished college the year after, we moved to Kilkenny to start our studio. Mike Kelly, who ran Young Irish Filmmakers from an old orphanage building, applied for a millennium arts scheme and we got a small grant which meant we could pay ourselves a few quid while we got the ball rolling. This was 1999 and we had one computer between us. It was a massive education for us: how to budget and schedule, how to divide duties and how to set up our accounts.”

Being thrust into the public spotlight has been a little strange, she says. “Making and promoting films are different skills. The Breadwinner’s Oscar nomination gave us publicity we could not have afforded, but I am happier making films than talking about them. I’m part of a huge team of creatives and it is kind of unfair when it gets boiled down to a director in the spotlight. But I got to stand up proudly when [Oscar winner for best actress] Frances McDormand told all the female nominees to stand. That made me smile.”

She’s currently working on Wolfwalkers, an animated feature about a young girl who comes to Kilkenny and encounters a strange wolf creature during Cromwell’s campaign in the 17th century. TV series Dorg Vandango and Pete the Cat are under way and she’s just announced a co-production with Disney TV called Viking Skool. “And I’m in development on a film with writer Meg LeFauve at the moment – she has written for films such as Inside Out and Captain Marvel, so no pressure there!”

Further education is often seen as the inferior cousin of higher education, but Twomey says that everyone forges their own path. “There is only one truth: if you work really hard and follow the thing that inspires you – whatever that is and however it changes over the years – you will feel like you’re doing your best in this world. There are no straight lines in life. We all get to where we’re going whatever way we can and life can and will bite you in the ass at any moment.”

Whether formal or informal, education never stops, she says. “It is not something you do in your teens and early 20s and then get a job. Not anymore. You can learn anything at any moment, through any means available to you. There is no inferior or superior, there is only what feels right for you at any given time.

“Maybe if I had managed to cling on in secondary school, I wouldn’t have taken all the subsequent risks. For a lot of my career I had nothing to lose so that gave clarity to my decision-making. Things have changed: I have a family and responsibilities, and the animation community in Kilkenny has grown to nearly 200 people. The animation base in Ireland is an example to many countries trying to create an indigenous industry. But what is success? For me it is simply being able to follow what I love.”

Many FE programmes offer progression back into a CAO course