Concern over lack of oversight involving sale of spin-out company 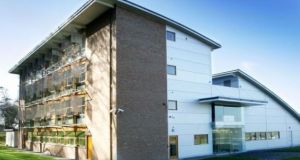 ArcLabs innovation centre at Waterford Institute of Technology has been home to more than 60 start-up companies, including FeedHenry Ltd.

Waterford Institute of Technology (WIT) retained less than €1 million from the €65 million sale of a spin-out company developed on its campus, according to a special report by the Comptroller and Auditor General (C&AG).

The report also raises concerns over the WIT’s governing body’s lack of oversight of the sale, including issues such as changes to the institute’s equity stake and conflicts of interest involving senior staff members.

WIT’s current president, Willy Donnelly, was vice-president of research at the time of the sale and personally benefited from the transaction.

Mr Donnelly has previously told the Public Accounts Committee that protocols were in place at the time to manage any such conflicts of interest.

FeedHenry Ltd, a mobile software company, was sold to a US multinational technology company for a about €63.5 million in 2014.

WIT’s governing body adopted a commercialisation policy in February 2010 setting out how conflicts of interest should be managed.

It also said the institute should consider a 15 per cent equity stake in spin-outs to be appropriate in return for assignment of its intellectual property (IP).

While a licence agreement between the institute and FeedHenry Ltd in July 2010 provided for the institute to take a 15 per cent share of the equity, WIT agreed in December 2010 to a reduced equity stake of 10.8 per cent.

The basis for the agreed reduction in equity was not documented, the C&AG report states.

The report adds that the governing body is ultimately responsible for the institute’s governance and for the protection of its assets.

However, it was not involved in any of the key decisions made during the commercialisation and assignment of the FeedHenry IP.

“Due to the potential value of the technology, the departure from policy on the share of equity and the fact that senior management had conflicts of interest through personal shareholdings, the governing body should have been actively overseeing the process,” the report states.

The C&AG examination also found neither institute nor national policies deal with situations where staff members have significant personal interests in companies acquiring IP from their employer organisation.

The report adds that negotiations for the rights to use the FeedHenry IP were led on the WIT’s behalf by the then secretary/financial controller, who was not a shareholder in any spin-outs.

While WIT’s then vice-president for research – Mr Donnelly – was a shareholder in FeedHenry Ltd, he was not formally involved in the negotiations with the company.

Many of the details of the negotiations were managed by officials from the research office.

Following the sale of FeedHenry Ltd, the report states that WIT received €1.6 million in respect of its shareholding.

The Institute retained €951,000 from the proceeds of the sale of its interest in FeedHenry Ltd.