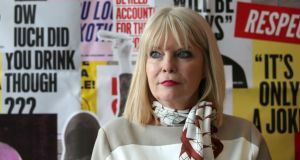 All third-level colleges should be obliged to provide classes on sexual consent for students or risk losing State funding, a Government-commissioned report has recommended.

The report follows rising concern over the level of rape and sexual assault on college campuses.

Commissioned by Minister of State for Higher Education Mary Mitchell O’Connor, it outlines a series of steps which third-level colleges should be required to take to help create “safer and more respectful campuses”.

Among its proposals are that:

• Third-level colleges should record and report incidents of sexual harassment, assault and rape on campuses, rather than leaving these issues to gardaí;

• There should be“transparent and accountable” protocols for dealing with staff or students who have been the subject of complaints;

• Colleges’ processes for investigating allegations should ensure parties have a right to a good name and their right to confidentiality and anonymity is respected;

• Students should be exposed to workshops and classes to boost awareness and understanding around active consent, sexual violence;

• An easy-to-use system for students to disclose and report any incidents, along with training for staff to provide support;

• The report does not make firm proposals on the vexed issues of whether consent classes should be mandatory or voluntary. Rather, it says there should be widespread access to workshops and classes.

Significantly, it says each college should report annually on progress in implementing these steps as part of their “compacts”, or performance agreements, with the Higher Education Authority.

Under these agreements, the authority can withhold or deduct funding for underperformance.

A recent Union of Students in Ireland report, based on a survey of more than 2,700 students, found 16 per cent of respondents had experienced “unwanted sexual contact”. Some 5 per cent of women said they had been raped, and a further 3 per cent that they had been the victims of attempted rape.

Ms Mitchell O’Connor said at a recent event she had received the working report and was analysing it with her officials, with a view to publishing it shortly.

“Harassment and assault are experiences too common for many of our third-level students,” she said.

“I want to ensure that young adults are supported to achieve positive sexual health. We all have a duty of care to our students, to protect them from sexual harassment, assault and safety from the fear and threat of it.”

She said it was important that “we assist third-level institutions to follows best practice, develop policies and work collaboratively to address sexual harassment and assault”.

Overall, the proposals seek to foster a change of culture on college campus by ensuring changes are led and overseen by senior management.

A draft of the report states that the aim for students is to develop “understanding, confidence and capacity” for active consent at a personal level and in supporting peers.

Students should also develop the knowledge and capacity to “challenge any normalisation of unwanted sexual comments or behaviour”.

In addition, classes would help students acquire skills for “confident reporting” and make them more aware of equality and diversity; the impact of gender role expectations; and factors such as alcohol and drug use.