Children with autism being ‘failed by the State’, say parents 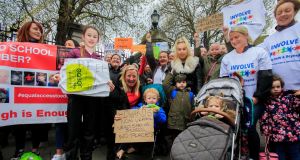 Members of the Enough is Enough Every Voice Counts Campaign during a protest at Leinster House. Photograph: Gareth Chaney/Collins

Parents of children with autism say the State is failing its most vulnerable citizens by not providing them with an appropriate education.

A large protest outside Leinster House on Tuesday drew attention to young people with autism who are unable to access education which meets their assessed needs.

Many frustrated parents say they are unable to access school places in autism classes attached to mainstream schools because demand is outstripping supply.

Other parents of children with moderate or severe intellectual disabilities say they have been turned away from special schools who say they are hugely oversubscribed.

Linda Comerford, spokeswoman for the Enough is Enough: Every Voice Counts campaign, said parents of many children with special needs are stressed nd worried.

“When children start school it’s usually an exciting and proud time for families watching their children start a new chapter in their lives,” she said.

“But for parents of children who require access to special schools and ASD [autism spectrum disorder] classes, the situation for hundreds is that they are unable to access an appropriate school placement.”

The autism charity AsIAm has estimated, on foot of a survey, that upwards of 300 “invisible” children are being excluded from appropriate education.

The group’s CEO and founder Adam Harris has called on the Minister for Education Joe McHugh to request urgent policy advice from the National Council for Special Education on the issue of school exclusion.

The only option for many parents is a home-tuition grant, which parents say means their children are left isolated in the home and have reduced access to education.

Shortages of places have been identified across the State, though the issues seem to be most acute in parts of Dublin, Cork and Kildare.

Members of the Autism School Dublin 15 Committee said a survey locally has found that more than 50 children in the postal district require access to an autism-specific school.

Some, it found, are travelling on round trips of up to 60km a day in rush-hour traffic to attend special schools.

“All of these children deserve an appropriate school placement within their community,” said Sile Parsons, a spokeswoman for the campaign. “That is true integration and inclusion.”

In a statement Mr McHugh urged school patrons and boards of management to do more to fulfil their obligations to provide specialist school places for children with special needs.

“Supporting and caring for a child with special needs can bring worries and concerns that not everyone experiences. It is our job to try and eliminate some of the additional difficulties and stresses,” he said.

Mr McHugh said he has been assured that the National Council for Special Education (NCSE), an independent agency of the Department of Education, is actively engaging with schools to try to ensure each child has a school placement appropriate to their needs for the coming school year.

“Two areas experiencing acute pressure on special school and special class capacity are Dublin 15 and in Kildare,” he said.

“I am also concerned about information that is being made available to parents seeking special placements for their children. Work is ongoing to secure additional placements and options are being explored in existing school infrastructure to address this as a matter of urgency.

He said there were undoubted challenges when it comes to the establishment of special school and class provision in some schools and communities.

The Department, Mr McHugh added, will consider all applications for funding for schools to re-configure existing space within a school building to accommodate a sanctioned special education class or to provide additional accommodation.

Since the enactment of the Education (Admission to Schools) Act last December, a power has been created to allow the Minister to compel a school to make additional provision for special education.

Mr McHugh said this power has yet to be invoked and he believed it should only be used as a measure of last resort.

“As Minister I hope that schools, patrons and boards of managements can be encouraged to work together with the NCSE to meet demand in the best interests of the children concerned.”