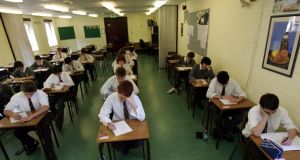 Minister for Education Joe McHugh is set to be told by the State’s curriculum advisers that making history compulsory for junior-cycle students could undermine recent education reforms.

Mr McHugh last year sought a review on whether history should be an optional subject in the junior cycle after concerns that some students would never learn about key moments in national history.

President Michael D Higgins is among those who have called for history to be made compulsory, while Prof Diarmuid Ferriter of University College Dublin said treating it as an optional subject was a “serious mistake”.

The 25-member council of the National Council for Curriculum and Assessment (NCCA) is to discuss the matter on Thursday, and report shortly afterwards to the Minister.

However, the NCCA has, it is understood, already prepared a draft report which states that any change to the status of history would have wider implications for the junior cycle framework as a whole.

Mr McHugh, who has said he wants a place for the subject “that demonstrates its value”, will make the final decision, though it would be highly unusual to reject NCCA advice.

“History never was compulsory. It was a core subject in more than half of schools,” the Minister's spokesman said. “But its popularity cannot be questioned and that is something that we should recognise.”

The NCCA report has found that junior-cycle reforms promote areas of “core learning” rather than core subjects, and that history remains important in the curriculum.

Under the reforms, the curriculum is broken up into 24 “statements of learning”, representing core and required subjects. Several of these directly relate to history.

Every child completing the junior cycle will still be required to study history in some form, whether as a full subject or in one of the new short courses or history projects.

The report notes that history was never compulsory in vocational schools, but was still taught is about 90 per cent of them. It has been mandatory in voluntary secondary schools.

The reforms – which sets out what young people’s educational experience should look like in the first three years of secondary school – followed three years of consultations and research.

Schools will get greater freedom, on foot of the experience of other schools especially those in working-class areas and special-needs schools, who have sought greater flexibility within an “overcrowded” curriculum.

The framework also emphasises the importance of supporting schools to develop programmes which strike a balance between acquiring knowledge and learning skills to critically interrogate knowledge.

The changes, say sources, are already helping to breathe new life into the study of history, with local history groups, museums and libraries reported increase engagement by students.