Is it right to award patronage for new schools on foot of local ‘beauty contests’? 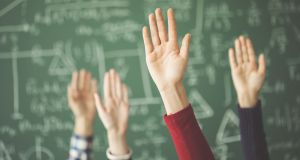 Patrons control the ethos and philosophy of a school, appoint the chair of the board of management and approve the membership of the board. Photograph: iStock

Over the next 10 years, the Government will spend an eye-watering €8 billion on new school buildings. It will then hand over the keys – and control – to largely unaccountable patron bodies who wield significant power over what happens in the school.

Patrons control the ethos and philosophy of a school, appoint the chair of the board of management and approve the membership of the board.

This gives the patron huge power to decide, for instance, the religious or philosophical approach of the school, what is taught in relationship and sexuality education (RSE) and how classes are structured.

The issue of patronage has been in the news following a divestment row in north County Dublin, on foot of claims that schools which lose their Catholic patronage may end up having to cancel Christmas festivities and other religious celebrations.

But for some there’s an even bigger question looming on patronage: is it right that the State is handing over control of newly built schools on foot of a popular vote among preschool parents?

Since 2012, parents have been surveyed about their preferred patron for new schools being built in their area.

These campaigns have seen various patrons running quasi-political local campaigns to persuade parents to vote for them; because the winner is decided by a first-past-the-post vote, the successful school can – and often does – win with less than 50 per cent of votes.

In principle, there is no reason why, for instance, Scientology or a radical philosophy could not win control of a local primary school if they gain enough votes.

Experience is also not a barrier. Some small patron bodies which have never run schools of any kind have managed to win control of new, multimillion euro facilities in recent times.

Once a patron has set up a school, the patronage or ethos cannot be changed without their permission.

In addition, patrons can be awarded control based on a very small number of votes: in the most recent competition, for example, Educate Together won a 16-classroom school in Goatstown, south County Dublin, based on just 65 of 116 votes.

It’s a system that has worked well for some patron bodies, but others are asking: is a beauty contest really the best way to decide school patronage?

Caoimhín Ó hEaghra, Ard Rúnaí of An Foras Pátrúnachta, the Irish language school patron, has been among the most vocal critics of how patronage competitions are playing out.

“Surveys show that about a quarter of parents want a gaelscoil, and yet less than 5 per cent are actually gaelscoileanna. There’s little logic to it: we got 60 votes for a Gaelscoil in Killester, north County Dublin, but no school. We got six votes in Stepaside, and we have a Gaelscoil,” he says.

Everybody thinks they can be a school patron. What is the limit?

“Previously, we just had to show that there was enough demand for an Irish-language school in the area, but now it’s a constant competition. We all recognise the need for diversity but the Irish language has a special status and the Government has a responsibility to support it.”

Áine Hyland, professor emeritus of education at UCC and one of the founding parents of the Dalkey School Project, which grew into the Educate Together network of schools, says the patronage system is not one that would be set up today.

“It dates back to 1831 but, until the Dalkey School Project, the department’s attitude was that only churches could be patrons. They did finally accept that articles 42 and 44 of the Constitution meant that parents’ rights had to be respected.

“I never envisaged it would develop as it has. On paper, it seems a good idea to take on the views of parents but it has led to more patrons than envisaged. Everybody thinks they can be a school patron. What is the limit?”

Hyland suggests that it may be time for change. “In 1902, there was a proposal that schools in Ireland would be controlled by local education authorities, which is in line with England and most western countries. I wouldn’t be against the Education and Training Boards (ETBs) being the patron for all new schools, provided that parental rights were protected.

“Greater flexibility about Irish language streams could also answer the concerns of An Foras Pátrúnachta. It may be an idea to put the issue to a citizens’ assembly and ask them: if we were to start from scratch, what might we do?”

Unsurprisingly, not all school patrons agree – especially the smaller players with big visions – but everyone agrees the current patronage system isn’t working as it should.

One of the most significant of these smaller patron bodies is the St Nicholas Montessori Society which, as well as running the Montessori teacher training college, is patron of a private, fee-paying primary school in Dún Laoghaire.

What’s different about them? “Children are bunched into three rough age brackets: three-six, six-nine and nine to 12,” explains Nick Breakwell, chief executive of the society.

“We don’t use terms like junior infants, third class or sixth class. The curriculum is similar but the environment is prepared for the age group, with materials specific to each environment.”

Another newcomer to the scene is Scoil Sinéad, which is patron of two Dublin schools: Scoil Sinéad Pelletstown primary (Cabra) and Griffeen Community College (Lucan).

It was founded by Sherene Powell-Ikafor, whose daughter Sinéad has autism. The school runs a special education class alongside every mainstream class, with the two sets of teachers working closely to maximise interaction.

Marianne Farrelly, principal of Pelletstown, says they are multibelief schools which mark a range of religious beliefs and festivals, and that experiential learning – such as bringing children to the canal or botanic gardens for science class or the library for World Book Day – is core to their philosophy.

It is right that the local community gets a voice and a say in the process, and parental choice does speak

Breakwell says the system militates against smaller players but the process itself is “smooth, clear and transparent for everyone”.

The Department of Education provides €500 to each competing patron, but smaller players including Scoil Sinéad have complained that larger organisations, such as multidenominational patron Educate Together or Irish language patron An Foras Pátrúnachta, have more staff resources to run campaigns.

“The competitions have run over the Christmas period, which isn’t ideal, and as we don’t have the same resources to go door-to-door, we organised public meetings, but it’s understandably difficult for parents to get out to these,” says Farrelly. “Ultimately, however, it is right that the local community gets a voice and a say in the process, and parental choice does speak.”

School patrons: who has control of our schools?

Catholic Church: It remains the dominant player in primary education, with almost 90 per cent of primary schools.

Protestant denominations: They are sole patrons of just over 5 per cent of primary schools, or 165 in total.

Others include State-run Education and Training boards (ETBs) which run 12 “community national schools” on a multidenominational basis, Scoil Sinéad and Lifeways Ireland (patrons of Steiner schools).

Catholic Church: It is the patron or co-patron for just under half (48 per cent) of post-primary schools. They are mostly voluntary secondary schools.

Church of Ireland: It is responsible for the running of 23 post-primary schools (3 per cent).