Changes in world of work are ‘destabilising and dangerous’ 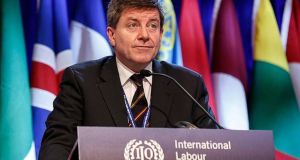 ILO director general Guy Ryder has warred that “accelerating disruptions” in the world of work and in societies are leaving people disoriented and growing inequalities are fuelling resentment.

The fact that so many people at work are struggling to make ends meet is “profoundly destabilising and dangerous”, the head of the International Labour Organisation has warned.

Guy Ryder, the ILO’s director general, was speaking at a conference in Dublin organised by the National University of Ireland and the Government marking the organisation’s centenary.

In a speech, Mr Ryder warrned that “accelerating disruptions” in the world of work and in societies are leaving people disoriented and growing inequalities are fuelling resentment.

In addition, the perceived capacity of policies and political actors to provide credible responses to people’s pressing concerns is breeding “disillusionment and loss of trust”.

Some in the public arena are purveying “simplistic alleged solutions” which, he said, were the antithesis of what the ILO stands for.

“There is a new brutalism at work in too many places. We should not dismiss what we are witnessing as mere rhetorical excess or lapses from proper standards of political decorum. In very real ways iron has entered the world’s political soul.”

Mr Ryder said the world of work is indeed undergoing transformative change that is unprecedented in pace, scope, and effect.

“It is been driven by technological innovation, demographic shifts, climate change and globalisation,’ he said.

“ I do not know and probably nobody knows whether the fourth industrial revolution will destroy more jobs than it creates. In my view, we should take great care not to fall into the game of techno-determinism, but rather do our job as the ILO and as humanity to decide what sort of future we want, and how we intend to manage technology to bring it about.”

He said the current technological revolution has the capacity to change not only production processes, but also the nature of work itself.

“We see that in the platform or gig economy, where the established institutions of work just do not seem to apply. Who is the employer when an algorithm allocates your work? Who is an employee?

“Where is social protection for such workers? What are their employment rights and how can they defend them?”

He said society will beed to be imaginative and determined enough to design and implement policies that will steer us in “ a direction not dictated by technology, but by our choices and those choices should be for social justice”.

Among the solitions, he said, involved investing in people, investing in jobs, skills, lifelong learning and comprehensive social protection.

It also means supporting gender equality and investing in the institutions of the labour market so a minimum wage is an adequate wage to live upon, something which is not the case today for many millions of workers.

“ It means addressing working time issues in a world where many people work to the point of exhaustion and others not enough to sustain life.

“ It means ensuring a right to a healthy and safe workplace, when nearly three million people die every year because of the work that they do. And it means adopting policies that promote sustainable economic growth and decent work for all.”

He said this agenda would represent a reinvigoration of that social contract which, for many citizens, lies at the heart of what they consider to be fair at work and in society.

“The fact of the matter is that today, too many people’s reasonable expectations of their working life are not being met. And that is a circumstance which is not just unsatisfactory and regrettable, certainly not enviable, but which is profoundly destabilising and dangerous. There is urgency in putting this right.”