First-preference applications for environment courses up 70% 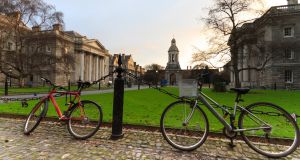 Trinity reported a 38 per cent increase in first-preference applications for its courses, reaching a record high for the university of 10,253. Photograph: iStock

Science and environmental studies continue to draw increasing interest from prospective third-level students, according to the latest round of Central Applications Office (CAO) data.

First-preference applications for environment courses rose by 70 per cent in 2021. Although there were a relatively small number of candidates, it was the largest percentage rise among CAO subjects.

Journalism has reversed its recent decline in popularity with courses receiving refreshed interest. First-preference applications increased by 58 per cent.

Applications for medicine climbed 25 per cent, and biological sciences by 21 per cent.

In volume terms, most applications for higher diploma courses were in the areas of health, business, nursing and arts.

Education sources put this down to a combination of factors including a natural demographic increase and Brexit. They said the pandemic had steered more adults back to education, as reflected in a 20 per cent increase in applications from mature students.

A total of 8,727 applications were received from people over 23 years of age, while 7,839 applicants sought participation in the Disability Access Route to Education, an increase of 587.

The other big movers in degree courses are hygiene and occupational health (up 43 per cent); social sciences (27 per cent); and pharmacy (26 per cent).

Arts has also arrested a continuing decline, rising by 11 per cent in 2021 and maintaining a strong place in traditional overall popularity.

Transport services recorded the largest rate of decline in applications, falling 44 per cent, although among a relatively low level of overall applicants. By contrast, last year the sector recorded an increase of 89 per cent, the largest gain.

The latest CAO data will be subject to change when late applications are taken into account and when the change of mind facility closes on July 1st.

Trinity College Dublin reported a 38 per cent increase in first-preference applications for its courses, reaching a record high for the university of 10,253. Overall applicants went up 32 per cent to 22,729.

In particular, it noted first-preference applications for computer science up 56 per cent and engineering 44 per cent. Medicine rose by 58 per cent, with gains also recorded across dentistry, science, pharmacy and physiotherapy.

“There has been an enormous increase in interest in the health sciences in particular,” said Provost Dr Patrick Prendergast. “But our Stem [science, technology, engineering and maths] and arts-humanities and social sciences courses are also attracting greater numbers of interested students.”

University College Dublin reported a 16 per cent rise to 9,981 in first-preference applications, but said the overall CAO increase represented a “significant anomaly” in the education cycle.

Its largest increases came in radiography (up 188 per cent) and sustainability (124 per cent).

The university’s other big climbers in terms of applications were architecture (up 59 per cent) and a number of healthcare programmes including mental health nursing (86 per cent); midwifery (46 per cent); and children’s and general nursing (40 per cent). Common entry degrees in engineering, science and computer science also all recorded gains.

“There is an expected demographic increase in the number of school leavers at Leaving Certificate level, which feeds into the national figure,” said deputy president Prof Mark Rogers.

“However, the reason for the scale of the overall increase is more complex. Additional applications from EU applicants because of Brexit, increased numbers of students applying from previous years, and a higher expectation of better results due to the application of accredited grades may all be contributing to the rise.”