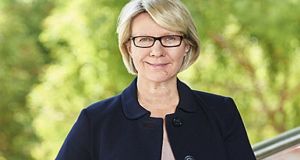 Prior to moving to Australia in 2012, Prof Eeva Leinonen was vice-principal at King’s College London. Photograph: Maynooth University

Maynooth University has announced the appointment of Prof Eeva Leinonen as its next president.

Prof Leinonen will formally assume the position on October 1st and replaces Prof Philip Nolan who has led the university for the last 10 years.

Her appointment on International Women’s Day has been described as an “important milestone” in Irish education.

Originally from Finland, the incoming president has spent recent years in Australia where she was most recently vice chancellor of Murdoch University in Perth and previously deputy vice-chancellor at the University of Wollongong in New South Wales.

Prior to moving to Australia in 2012, she was vice-principal at King’s College London.

Prof Leinonen’s academic background is in linguistics and psychology. She has been involved with ongoing research into pragmatic language development in children and contextual processing deficits of children and young adults with autistic spectrum disorders.

“High quality innovative education, world-class research that has positive societal impact and transformational educational opportunities for all who can benefit irrespective of background are hallmarks of Maynooth University and resonate closely with my approach to university education,” she said in welcoming Monday’s announcement.

The chairwoman of the university’s governing authority, Dr Mary Canning, said Prof Leinonen’s track record in the leadership and management of higher education institutions internationally will be of great benefit to Maynooth and to the higher education system in general.

Her appointment was also welcomed by the Maynooth Students Union.

Responding to the departure of Prof Nolan, the Minister for Further and Higher Education, Simon Harris, noted that he had become a “familiar face” through his role on the National Public Health Emergency Team (Nphet).

“He has been extraordinarily busy leading this university and balancing that with his responsibilities as member of Nphet. I want to thank him for all that work. We are indebted to him for his leadership at this crucial time,” he said.

“On International Women’s Day, I am delighted to announce the appointment of Prof Leinonen [who] will become the third female university president. Last year we had none. While we have much more to do on gender equality, this is an important milestone.”