CAO offers: ‘It was always going to be hard to find a solution to suit everyone’

Most Leaving Cert students were happy, but some pre-2020 students hit by grade inflation 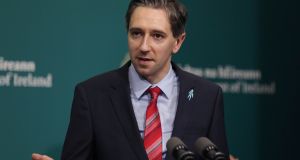 Minister for Further and Higher Education Simon Harris at Government Buildings on Friday as more than 53,000 students have received an offer in the CAO’s first round. Photograph: Damien Eagers/Julien Behal Photography/PA Wire

When Lorna Griffin received her text from the CAO at noon on Friday, it was not the news she had been hoping for.

The 19-year-old from Kerry, who had taken a year out after her Leaving Cert to save for college, had not been offered pharmacy at University College Cork (UCC). The grade inflation phenomenon of 2020 had been damaging enough to mean her 577 points were, unusually, not enough.

“I am just really disappointed, to be honest . . . I am more disappointed with how the Government dealt with us [pre-2020 students].”

Griffin said emails from her and others had been ignored – a “copy and paste” response simply said nothing could be done to help them in the points race which this year took a bizarre twist.

“I think I am going to accept [the offer] and hope that I get pharmacy in the second or third round,” she said.

“I just don’t think I can wait another year all on my own, working, [with] all of my friends in college.”

Carolyn Hulbert (20), from Dublin, was in a similar position but with a more positive outcome. She had applied for occupational therapy in Trinity College Dublin with the 530 points she earned in 2019.

Grade inflation put it out of reach by just three points, but she was happy with her second choice: clinical speech and language studies. She does not believe the additional college places made the difference.

“It doesn’t level the playing field. The majority of those would have gone to people who did their Leaving Cert this year. I actually thought I wasn’t going to get anything today.”

With most students getting one of their top three chosen courses, the experiences of this year’s Leaving Cert students were often positive.

Grade inflation or not, 19-year-old Ethan Mooney’s 600 calculated points were more than enough to cement him a place at the 356-point international business and language course at TU Dublin. With 12-hour study days, the prospect of waiting for August to sit his exams was not a pleasant one.

“I was still nervous. I was excited when I got the offer on my phone because you don’t believe it till you see it,” said the student of St John’s College in Ballyfermot, Dublin. “The general feeling [among his year] was that everyone was happy with what they got.”

In Longford, 18-year-old Ellen Kenny received 625 points which easily secured her a place studying philosophy, politics, economics and sociology at TCD, which required 589.

“I know I have been very lucky, that I was graded very fairly,” she said. “It was always going to be hard or nearly impossible to find a solution to suit everyone.”