Students should consider not going home at weekends – CAO board chairman 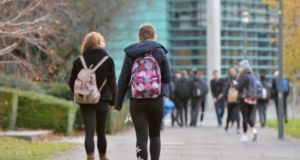 Third-level students should consider not returning home at the weekends during the academic term, in order to reduce the spread of Covid-19, chairman of CAO board says.

Third-level students should consider not returning home at the weekends during the academic term in order to reduce spread of Covid-19, the chairman of the CAO board has said.

The suggestion has been challenged by the Union of Students in Ireland (USI), which said visiting family is important for the mental health of young people.

Prof Pól Ó Dochartaigh of the CAO said he recognised many students were involved in local sports clubs and had part-time jobs at weekends to help finance their studies, but “in an ideal world”, students should consider staying in their college accommodation for the semester and going home “only occasionally.”

Speaking on RTÉ radio’s Today with Claire Byrne show, he added that travelling between counties on a weekly basis is “very different” from attending school or commuting to and from work.

“Students go on a weekly basis, they will be meeting others from all over the country and then going back into their home communities and that is a potential spreader, there’s no doubt about that, for all of the universities, for all of the colleges in the country, so I think it would be really important that students, if at all possible, were to stay in the campus, in the university, in the college setting, for most of the semester,” he added.

Prof Ó Dochartaigh, who is also the deputy president of NUI Galway, said he understood this would be “a tough ask” especially for first years.

“We’re not saying to people that you absolutely must do this, come hell or high water, but I think where anyone can reasonably do that and can cope with that, I think they should consider it, seriously,” he added.

USI president Lorna Fitzpatrick said this suggestion was “very unfair” and “does not align with any of the other messaging we received from the Government”.

“It baffles me that people are being encouraged to take staycations, to eat in restaurants and cafes, but now students are being told they can’t see their families,” Ms Fitzpatrick said. “These comments are extremely concerning. It’s not public health advice. It is important that the Minister clarifies this as soon as possible.”

Sources from the third-level sector believe this move would not need to be implemented as the academic term is being carried out primarily online in many higher education facilities.

The sources believe with some lectures moving online, under a system known as hybrid or blended learning, many students will opt to remain at home for the year, rather than taking up the option of college accommodation.

A spokeswoman for Trinity College Dublin said the proposal is not something that has been considered at the university, while a spokesman for DCU said it is offering “flexible on-campus accommodation” as it is “highly unlikely” any given student would need to be on campus more than a small number of days per week.

Minister for Higher Education Simon Harris has been contacted for comment.