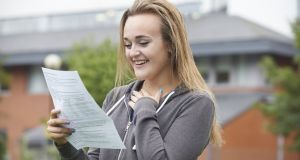 Through no fault of teachers themselves, it was widely expected that this would lead to grade inflation – and it has. Photograph: iStock

The results are in – and the number of top grades have shot up.

Normally, the Leaving Cert results as a whole are predictable as sunrise and sunset, with the bell curve ensuring that there’s no significant deviation between grades from one year to the next.

This year, however, the pandemic meant that the exams were cancelled and teachers predicted their own student grades. Through no fault of teachers themselves, it was widely expected that this would lead to grade inflation – and it has.

For most subjects, however, the mode (the most common grade) remains at H4, with a smaller number of subjects having a H3 mode.

As a result of higher grades, CAO points seem likely to rise, although this may be mitigated by a lower number of international students coming to Ireland (especially in medicine) and the provision of an additional 1,250 third-level places.

So which subject grades have risen the most, and which have stayed reasonably consistent?

Since 2012, Irish has had the highest amount of top grades in any subject besides minority languages and music – a fact that is often lost in somewhat trite chatter about Irish being badly taught.

English is traditionally one of the hardest subjects to secure top marks in, but it also has one of the lowest higher-level fail rates.

This year is no different: while the number of H1s in English are up from 3 per cent in 2019 to 4.3 per cent in 2020, this is, by some way the lowest amount of top marks awarded in any Leaving Cert subject. For contrast, the next lowest number of H1 grades is in geography (6 per cent) followed by construction studies (7.4 per cent) and French (7.7 per cent).

Maths matters to students and policymakers alike. For students, a basic pass is a requirement for most third-level courses. For policymakers, successive Governments have sought to encourage more students to take higher-level maths and, ultimately, to enter into more science, technology, engineering and maths (Stem) courses at third level.

The third-level sector will be particularly wary of the surge in higher maths grades this year, because many lecturers on Stem courses have been repeatedly warning that too many students are entering without a sufficient level of maths.

At ordinary level, O1 grades have jumped from 1.7 to 4.4 per cent, though top grades have stayed reasonably steady. Fail rates are down from 4.3 per cent to 1.8 per cent.

Year after year, minority language subjects – sat by students who are almost always bilingually raised in a family where at least one parent speaks the language – have the highest grades.

Croatian had the highest number of H1 grades of any Leaving Cert subject, with 70.6 per cent securing a H1 compared to just 9.8 per cent last year – a grade inflation of 720 per cent.

Business students have seen the number of H1 grades more than double, from 4.2 cent last year to 8.5 cent this year while top marks in accounting have soared from 6.9 per cent to 17.4 per cent.

The number of top geography grades are also up, from 3.9 per cent last year to 6 per cent this year, while “honours” grades have risen from 80.9 per cent to 87.2 per cent.

The failure rate for classical studies has always been persistently high compared to other subjects, with the chance of top marks correspondingly low. This year, H1s have more than doubled, from 6.6 per cent in 2019 to 12.3 per cent in 2020, while the fail rate has fallen from 3.2 per cent to 0.6 per cent.