Have high-achieving schools lost out under the calculated grades process?

Government sources feel the new system delivered results in the fairest way possible, with an overall increase in grades 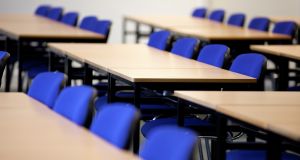 The Institute of Education, the State’s largest grind school, is one of many which feels it has been penalised under the new process. Photograph: Brendan Duffy

With fees in excess of €7,000 per student, full-time grind schools have always justified their cost on the basis that their results speak for themselves.

Students in their schools, they say, are top pupils who significantly outperform the national average.

“Let’s face it, parents pay a lot of money and there is an expectation that students will fulfil their potential,” says the head of one grind school, who declined to be named.

“But this year, we can’t say that. So many of our students have been downgraded under the calculated grades process ... Something has gone wrong.”

The Institute of Education, the State’s largest grind school, is one of many which feels it has been penalised under the new process.

It says “endemic flaws” in the system meant that 96 per cent of its students had one or more of their teachers’ estimated grades reduced. Overall, they say, 44 per cent of teachers’ grades were lowered compared with an average of 17 per cent.

But it’s not just grind schools that are angry at the outcome of the new process. Many top-performing schools in the country – both private and non-fee paying – feel they have also lost out under the process.

Most feel the Government’s decision to withdraw controversial “school profiling” – a measure originally aimed at recognising a school’s performance over three years – ended up disproportionately lowering their results.

Certainly, that is the belief at St Kilian’s Deutsche Schule in Clonskeagh, a private school specialising in the teaching of German.

While it expected half of its students to secure a H1 in German based on past performance, just 14 per cent secured this grade under the calculated grades process.

“The students in St Kilian’s have been seriously disadvantaged because of a warped bias based on the outcry in the UK,” said school principal Alice Lynch, in a letter to the Department of Education this week. “Where is the justice here? How is this wrong to be righted?”

The Department of Education, however, has said the calculated grades process was “blind” and there is no evidence of bias towards any school type.

While it has not commented on individual schools, Government sources feel the new system delivered results in the fairest way possible, with an overall increase in grades.

Sources say there was evidence that some schools were significantly over-predicting students’ grades by up to two, three or even four times what might have been expected in normal times.

This, they say, is why a standardisation process was needed: to ensure students’ whose teachers were overly generous did not benefit disproportionately; and that students whose teachers gave predicted grades closer in line to historical achievement patterns were not penalised.

As a result, they say the proportion of downgrades of teachers’ estimated grades in an individual schools is not a reliable indicator; they say schools performance this year compared to its historical performance is more likely.

Even so, some high-achieving schools still insist that overall grades this year are significantly down on last year.

The hope within Government is that the CAO round one offers will provide most students with offers and that frustration will begin to melt away.

But with students set to be able to see their teachers’ predicted grades from next Monday, there is every chance this will reignite a sense among some that they have been treated unfairly by an algorithm which failed to recognise high achievement in all cases.