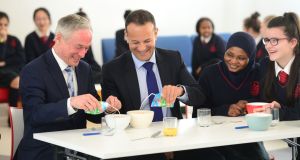 Ministers Richard Bruton and Leo Varadkar with students at the announcement of expansion of the School Meals Scheme 2017. Bruton said 79 schools were to be added into the Deis programme. Photograph: Dara Mac Dónaill

A consultant who helped devise a new tool to identify the most deprived schools in the State in a fair and objective way has accused Minister for Education Richard Bruton of playing politics with the system.

A new plan to tackle educational disadvantage was launched earlier this year, which involves providing vital additional resources to deprived schools such as extra teachers and grant-aid.

The schools were identified using a new deprivation index which allows policy-makers to objectively identify the level of disadvantage among school pupils based on home addresses and census data.

It replaced a survey completed by school principals which was widely regarded as flawed and vulnerable to “gaming”.

Mr Bruton announced that a total of 79 schools were to be added into the Deis (Delivering Equality in Schools) system for the first time using the new index.

However, he decided to protect the status of 800 or so schools which have been in the scheme for up to a decade, regardless of whether they were still classified as disadvantaged or not.

You either have an objective system which is responsive and takes out political considerations, or you don’t

This means that there are schools outside the Deis scheme that are more disadvantaged than some within it.

Trutz Hasse, a social and economic consultant who helped develop the index, said the decision undermined the integrity of the new evidence-based system.

“If you decide that no school loses its status, it’s pointless,” Mr Hasse said. “It reduces the room for manoeuvre. You can’t have it both ways. You either have an objective system which is responsive and takes out political considerations, or you don’t.”

Many schools in disadvantaged areas which have been excluded are convinced they meet the criteria to secure extra resources based on their own research, and on discussions with the Department of Education.

Mr Bruton has acknowledged that some schools which are not in the scheme may have levels of disadvantage which could qualify them for Deis support.

“There are many in the next tier who have a very strong case for assistance, and no doubt some of them are more disadvantaged than some of the schools already in [the scheme],” he said. However, he has declined to estimate how many schools might fit into this category.

Mr Bruton said the process of identifying these schools would begin next year and special “transition” arrangements would apply to any that were to exit the scheme.

“We don’t want to pull supports away from a school and leave them in real difficulty,” he said.

A total of 88 schools in deprived areas have appealed decisions in recent weeks not to include them or are seeking validation of their data.

Fianna Fáil’s education spokesman Thomas Byrne called on the Minister to disclose the outcomes for individual schools under what he called the new selection “farce”.

What other schools should be getting disadvantaged support and aren’t because of a flawed and unexplained process which was rushed out for political advantage?

“It’s astonishing that no details have been released regarding the criteria used for the new Deis selection process,” he said.

“What other schools should be getting disadvantaged support and aren’t because of a flawed and unexplained process which was rushed out for political advantage?”

Mr Bruton said he was reluctant to list the individual outcomes on the basis that it could create league table which might stigmatise individual schools.

He said the department was now focusing on what sort of transitional programme might apply to schools which faced exiting the Deis scheme because they might no longer meet eligibility criteria.

“In the event that this further analysis concludes that the level of disadvantage within some schools inside is less than that of some schools outside of Deis, this would have to be considered in the context of finite resources,” the spokesman said.