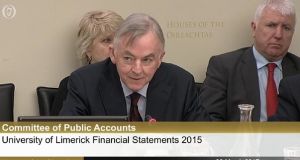 Two people who raised concerns about expenses claims at University of Limerick remain suspended on full pay, two years after making a complaint of bullying, an Oireachtas Committee has heard.

Senior University of Limerick staff, including outgoing president Prof Don Barry and director of finance John Field, were questioned on the university’s financial accounts at a hearing of the Public Accounts Committee on Thursday.

The committee is currently examining financial statements for 2014/2015 from third-level colleges.

It heard three individuals, referred to as Person A, Person B and Person C, had made complaints about irregularities concerning expenses claims at the university.

The allegations had been referred by the university in 2012 to the Comptroller and Auditor General (C&AG). An investigator was appointed by the Higher Education Authority (HEA) in 2015 to examine the allegations.

Person A, the committee was told, took early retirement following a period of sick leave while Persons B and C were suspended after an external investigation found against them over an allegation of bullying they made against a colleague.

Persons B and C have taken their case to the Workplace Relations Committee and a hearing is scheduled next month.

Sinn Féin’s Mary Lou McDonald said Person A, Person B and Person C had come forward with “astonishing complaints in respect of what they described almost like a VIP system in terms of how expense claims were awarded”.

Referring to the allegations as “extremely serious”, Ms McDonald said the allegations represented “at best, systems failure or confusion” or, “at worst, corruption within the system at the university”.

Addressing Prof Barry, Ms McDonald said Person A “stumbled across a system that was arbitrary, and a system that displayed favouritism and a system that completely went against the grain and broke your own rules, according to the status of the person making the claim”.

‘Stonewalled’ and ‘leaned on’

She said Person A was “stonewalled” and “leaned on” by management and “got sick as a result of all of that”.

Prof Barry said his understanding about the issue was “miles apart” from Ms McDonald’s, but he was “very reluctant” to share personal information about Person A in a public forum.

Prof Barry said the university “is committed to an ethos of continued improvements” and he “welcomed” the findings of a HEA-commissioned Mazars report into the allegations.

He said the university had implemented 12 out of 15 recommendations set out in the report and is in the process of implementing the remainder.

Prof Barry said he did not believe there was abuse of the system.

“I would certainly reject any statement that there was any corruption going on in the University of Limerick in the strongest possible terms,” he said.