Many schools believe they have been unfairly excluded from disadvantage scheme 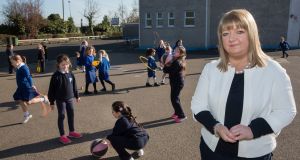 Louise Tobin, a principal at St Joseph’s Primary School in Tipperary town. She says she was shocked when her school was excluded from a scheme to help disadvantaged schools. Photograph: John D Kelly

Louise Tobin, principal at St Joseph’s Primary School in Tipperary town, sees the cliff-face barriers facing some of the children who arrive at her door every day.

“Many simply don’t have the vocabulary or the bank of nursery rhymes that other children would have. They might not have had a breakfast, or won’t have a proper lunch.

“There are children from very marginalised backgrounds who need all the help they can get to narrow the gap between them an other children .”

Other schools in the town are struggling with similar issues. It is one of the more deprived towns in the country, based on indicators such as unemployment, education levels and family structure.

So when Minister for Education Richard Bruton announced plans to expand a scheme to support disadvantaged schools earlier this year, St Joseph’s was hopeful.

Having studied the profile of other 800 or so schools already in the Deis (Delivering Equality of Opportunity in Schools)] scheme, Ms Tobin calculated that the school would easily qualify for the criteria.

“To get Deis status would mean getting two additional teachers, a home-school liaison to engage with parents. We’d also get money – about €30,000 – to fund the school which is run on a shoestring. There would be training for literacy and numeracy, as well as lunches for all pupils,” she says.

When the school didn’t make the list, she was dumbfounded. In fact, none of the schools in Tipperary town qualified for the scheme.

“It seemed open and shut. Then, I saw schools which had nothing like the scale of deprivation or challenges that we’re facing . . . I was flabbergasted,” she says.

Until recently, Deis schools were identified using surveys filled in by the schools themselves, which was vulnerable to principals 'playing' the system

St Joseph’s wasn’t the only school taken aback. Almost 90 schools in deprived areas – attended by more than 10,000 pupils – are appealing decisions or seeking verification of their data on the basis that they have been wrongly excluded from the scheme.

The irony is that a selling point of the new Deis system – which uses a new and more scientific identification process for identifying schools – was that it would be fair and transparent.

Until recently, Deis schools were identified using surveys filled in by the schools themselves, which was vulnerable to principals “playing” the system.

The new affluence and deprivation index uses census data – right down to street-level – and pupils’ addresses to identify schools with the highest proportions of children from deprived backgrounds.

It takes into account a variety of factors, such as social class, educational levels of parents, lone parenthood, parental occupation and unemployment.

A total of 79 schools were added to the Deis scheme for the first time, while a further 30 had their status uplifted from band two to band one – which involves greater levels of support.

Controversy centres, not so much on this process as, on a political decision to protect the status of the 800 or so schools currently in the Deis scheme, regardless of whether they were found to be deprived or not.

It means there are likely to be significant numbers of other schools which meet the criteria for support, but which have not been added due to limited resources.

A spokesman for the Minister declined to say how many of these schools have been identified.

Trutz Haase, who co-designed the index used by the department, says a political decision to protect schools undermines the system itself.

“If we want to respond faster to meet the needs of pupils, we have to allow schools to fall out of it,” he says.

Many schools may passionately believe they qualify for support, but have no way of knowing for sure if they meet the threshold

“You need clear transitional arrangements in place . . . I think the Ministers should keep out of making promises with evidence-based systems,” Mr Haase says.

Many schools may passionately believe they qualify for support, but have no way of knowing for sure if they meet the threshold.

In the case of St Joseph’s, however, a delegation was told by department officials that they were “in the space” of meeting Deis criteria, but were not being admitted at this time.

The department has an appeals process, though Ms Tobin claims this hasn’t gone anywhere.

A spokesman for the department said the process will be “refined” in future years and this will include measures to transition schools out of Deis.

He said the entry of any future schools into Deis will be based on updated data based on the most recent census, but it was not possible to estimate how many “in the event of additional resources being made available”.

On the issue of why schools have not yet been told of their individual data, he said there were plans to do so.

He said schools’ results will not be published as there is a risk it would allow “crude comparisons” to be drawn in terms of relative levels of disadvantage in schools.

“This would be highly divisive; unfair to parents, students and communities; place schools in an invidious position; and be contrary to the public interest,” he said.

None of this is much comfort to Ms Tobin or her school.

“We run the school on a shoestring. We don’t ask for voluntary contributions because we don’t want to put parents under even greater pressure. We need extra support,” she says.

“We’re talking about the lives of all of little children in Tipperary town, coming from disadvantaged homes. This is a chance to help bridge the gap between them and other children. They deserve a better chance. ”