Who can afford the country’s ‘most expensive school’? 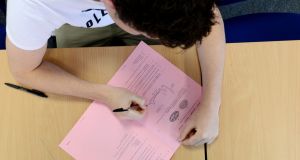 It’s likely that some affluent Irish families may well be attracted by the fact that an alternative to the Leaving Cert will now be available. Photograph: Alan Betson

The arrival of what looks set to be the country’s most expensive private school begs a question: who will be able to afford to go there?

The school – to be operated by Nord Anglia Education, which runs international schools in 17 countries – typically charges anywhere between €20,000 and €35,000 for a secondary school place.

While the operators say no fee structure has yet been agreed, based on its charging regime elsewhere it will easily surpass the charges for secondary schools in the capital which range between €3,500 and €8,000 per year.

This should not unduly worry the operators: they are targeting the children of highly mobile executives and diplomats rather than Irish families living in the capital. It is estimated that there are about 1,500 students from international families based in the capital.

Many of these families have found it difficult to access places for their children in prestigious schools, given that so many south Dublin colleges are oversubscribed with long waiting lists.

Another issue that most of these international children would prefer to study for a portable qualification rather than the Leaving Cert.

That is why the new private school will eschew the State curriculum altogether and it is planning to prepare students for the international baccalaureate.

The qualification – taught to children from primary to secondary level – is recognised world-wide and culminates in a two-year diploma. While the two-year duration is comparable to the Leaving Cert, that’s where the similarities end.

The international baccalaureate allows students to focus on fewer subjects and in greater depth. While students take on six subjects, only three are at a higher level (though higher and standard level are awarded equal points).

While the school will be firmly fixed on the international market, it’s likely that some affluent Irish families may well be attracted by the fact that an alternative to the Leaving Cert will now be available.

In addition, the school will not include any religion classes or faith formation, unlike many Irish schools, leaving more time to focus on literacy and numeracy.

The international baccalaureates offer a pathways into Irish universities – the grades can be converted into CAO points, though some say the points translation is not sufficiently generous.

St Andrew’s College in Dublin is currently the only secondary school in the capital which teaches the programme, though it is optional for students.

While being outside the State curriculum will give the new school much freedom, it also means that it will not receive any Department of Education funding. Teachers in private schools, for example, are mostly paid for by the Department; the teachers at the new international school will be privately contracted, which is one reason why it will be so expensive.

This, however, shouldn’t be too much of an obstacle for its wealthy target market.