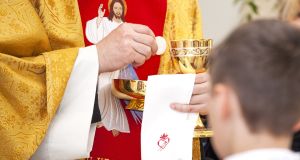 Letter reveals that bishops are not happy with the amount of time allocated for faith formation in the curriculum for teaching religion used by community national schools. Photograph: Istock

Catholic bishops told State-run primary schools last year they were not satisfied that children were being adequately prepared for Confirmation and Communion.

The Irish Episcopal Conference wrote to the State body which runs community national schools stating that its faith formation programme did not meet the requirements for sacramental preparation for Catholic children.

Instead, it said “local arrangements” would be agreed between parishes and community national schools for sacramental preparation to be held in schools outside of school time.

Community national schools, which are run by local Education and Training Boards (ETBs), were established a decade ago in response to increasing diversity in Irish society by the Department of Education.

They were set up as multidenominational schools which allowed for religious instruction and sacramental preparation for Catholics.

There are currently 12 community national schools with almost 4,000 students.

Following the letter from the Irish Episcopal Conference, the umbrella body for ETBs announced last September it would no longer provide sacramental preparation classes for Catholic students during the school day.

It said the move was aimed at ensuring all children were treated equally in school.

The letter has emerged in correspondence released under the Freedom of Information Act to Atheist Ireland.

A memo prepared by ETB officials indicates that bishops were not happy with the amount of time allocated for faith formation in the curriculum for teaching religion used by community national schools.

This programme, known as “Goodness Me, Goodness You”, was developed by the National Council for Curriculum and Assessment.

The policy of community national schools to allow for sacramental preparation during the school day had been the source of ongoing criticism from equality campaigners. They argued that the approach involved “segregating” children for religious instruction.

The revised policy of community national schools has been to provide a “belief-nurturing” environment by allowing students to explore their faiths and beliefs.

This, the then general secretary of ETBs Ireland Michael Moriarty said, would “encourage pupils to engage with their families and belief communities to learn more about their own faith or secular beliefs”.

Community national schools have been a model which senior Catholic figures were comfortable with due largely to the space for faith formation during the school day.

Prior to the establishment of community national schools, bishops had warned that provision of faith formation for Catholic pupils was a “minimum non-negotiable requirement” for its support for the new school model.

There has been speculation that many Catholic schools could end up being divested to community national schools over the coming years under plans to provide greater choice for parents.

The recent shift in policy on faith formation, however, may change the nature of this relationship.

Two years ago, Fr Michael Drumm, then chairman of the Catholic Schools Partnership which represents Catholic bishops in the education sector, gave a clear impression that it was willing do to business with this model.

He said at a conference that “patronage was adaptable”, and he would welcome alliances with other patrons.